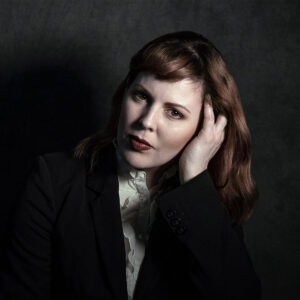 -Emma: Ever since I can remember… way back to my earliest years! I’ve always been fascinated by horror – films, books etc.

I remember seeing Albert Pyun’s “The Sword and the Sorcerer” at a very young age in the 1980’s when it had its UK video release. And although it’s a fantasy film it does have some very strong horror elements. I would say that was my first proper glimpse of horror cinema as such.

-Emma: I’d been modelling for alternative clothing brands for a number of years, which then lead to me getting involved front of camera in a handful of music videos, the most notable being B.E.F. / Kim Wilde’s “Every Time I See You I Go Wild” (2013). That was my first taste of actively being involved in a public project that was more horror driven. It inspired me to create my own content, mainly interview pieces for friends running genre news sites. One of the pieces I became involved in was interviewing filmmakers at a genre festival. I realised quite quickly that the people I’d interviewed were very much like me in terms of experience and had leapt headlong into creative filmmaking with fantastic results. As nice as it is to have lovely photos and footage of yourself front of camera I really wasn’t putting my full creative skill set to use, and that’s when I made the decision to create my first self Produced/Directed film “Seize the Night” (2015). The rest feels like history, I’ve done so much already in such a brief time span.

-Emma: I think a lot of people misunderstand horror. Often when I mention working within the horror genre people have one of two reactions, either they recoil or they are genuinely fascinated. I think people have a tendency to associate horror with torture porn and excessive blood and gore (my films don’t contain either at the time of writing). While that is certainly an element of horror other sub-genres such as paranormal and psychological horror films are often mislabeled as thrillers for example. I think quite a few people do like watching a smattering of horror films at one point or another, whether they choose to call them horror or not, and they’re usually supportive of my endeavours at least!

-Emma: Although I think female filmmakers are well supported within the truly independent horror scene right now (and generally I’m one of those lucky enough to have a reasonable amount of exposure) not everyone is afforded that opportunity. As well as shining a spotlight on new and upcoming talent it helps give women more of a voice, both to talk about the great things they’ve been doing and to highlight where support or change is required. Everyone has different experiences, both good and bad, and this is a time to reflect upon those and strive for advancement where needed.

-Emma: Not a single woman in particular, I would say I see positivity in a number of female characters I see being created on screen, and I see that same positivity in my social media news feed every day from fellow female filmmakers, actors/artistes and their supporters. And that is both inspiring and encouraging.

-Emma: It’s changed considerably, and thankfully for the better! The way women are portrayed on screen has developed over the years, and we are now seeing a greater number of strong female lead characters, particularly in the horror and sci-fi genres. This is a change I feel is still not reflected across other more mainstream genres though. In terms of women behind the camera, movements like ‘Women in Horror Month’ have definitely helped shine a spotlight on more individuals. 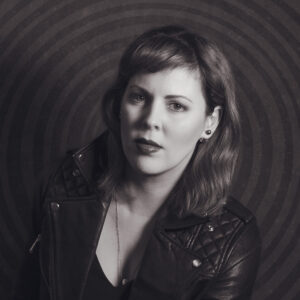 -Emma: I recently read “Vox” by Christina Dalcher. Set in a dystopian future the American government decrees that all females will be limited to 100 spoken words a day and that their place will remain in the home – while men are allowed a free life, of course. For me it read somewhere between “A Handmaid’s Tale” and “The Stepford Wives”, and whilst being pegged as a thriller, it certainly represents a horrifying view of the near future. A future which doesn’t seem that implausible given the degree of sexism and suppression of minorities we have seen both systemically throughout history, and which has become increasingly prevalent in modern culture and politics. “Vox” was received to widespread critical acclaim, and after reading I gifted the novel to another woman in horror!

–PH: What do you think the future holds for women in horror?

-Emma: It’s hard to say. As women I think we are facing a new challenge with certain political personalities having come into power in recent times who clearly don’t have an altogether positive view of women and see empowered women as a threat. This does have a knock on effect across every single industry. However, I do feel the independent horror scene is incredibly encouraging towards women in film. What I’d like to see is more of this talent scouted by Hollywood, the UK film industry etc. and women moving on from driving their own projects to actually being hired for studio projects.

-Emma: I agree, we need to see more diversity, absolutely. I love Jordan Peele’s “Get Out” and “Us”, and wait with bated breath for the upcoming “Candyman” sequel, which was partly written and produced by Jordan Peele, and helmed by black female director Nia DaCosta. I can also throughly recommend “His House” (2020), which focuses on a refugee couple from war-torn South Sudan, and is directed by Remi Weekes. In the film the couple arrive on British soil not only to be terrorised by a horror that has followed them from Sudan, but to face further socio-economic issues, racism and prejudice.

I hope things are changing, and the days of horror films consisting of a group of friends where the token black man is killed off first, swiftly followed by a busty blonde are gone. In general colour, race, gender, sexuality, and other prejudices should not be an issue, certainly not in 2021. What can we do to change things? I think most people with prejudices are afraid of differences and the unknown. By continuing to expose people to diversity through creative media like film I think eventually it will help people see that we’re not that different after all.

-Emma: I’m sure lots of people will give a similar answer, but Sigourney Weaver as Ellen Ripley has to be one of the ultimate final girls. “Alien” sees Sigourney play a relatable woman who isn’t overly girly, nor macho, she’s simply a regular person, and that’s definitely part of the appeal of “Alien” for me.

As far as female villains go I’m generally drawn to characters who become the villain through tragedy, loss, or personal insecurities. For example Jessica Lange plays “American Horror Story: Coven” antagonist Fiona Goode perfectly. Desperately trying to keep her youth, her health and her reining position as Supreme witch she will stop at nothing short of murder to secure it.

Or Bette Davis as ‘Baby Jane’ Hudson in “What Ever Happened to Baby Jane?”, a child star once revered who could not bear to let go as she inevitably aged and lost her fan appeal. Meanwhile her sister Blanche blossoms as an actress, and Jane’s jealously and insecurities escalate, leading to terrible consequences. There’s also a fabulous “Columbo” episode named “Forgotten Lady” from 1975 that has similar themes.

-Emma: I hope to be in a position to start talking about my next film towards the end of the year (pandemic allowing), until then I would recommend checking out “The Isolation Horrors” (2020) on YouTube, which has a segment from me in named “Goryō”. Each of the anthology’s segments focuses on the coronavirus pandemic, but brings in a more traditional horror aspect (which perhaps right now is less horrific than the real world). Also, if you have the recent 101 Films release of “Prom Night” (1980) it’s worth checking out the special feature documentary packaged with it called “Chasing the Final Girl”. I speak with others on the subject of the final girl, and it’s made by a female filmmaker too! For upcoming news and more information on my existing projects please check out my website (listed below). Thanks for having me back on the Promote Horror website for Women in Horror Month, and thank you as always for championing independent film!

We would like to thank Emma Dark for taking the time to answer our questions, but more importantly for her contribution to horror!