-Heather: I think I first became a horror fan about the age of 4! I live on, and am from, Martha’s Vineyard. I got to watch the filming of “Jaws”. I remember them wheeling the shark (“Bruce”) down main st…it was HUGE! but I wasn’t scared…I was more amazed. also, I think this helped me to be less afraid of horror as I grew older, because I knew it wasn’t real. some things scared me, and still do, but I know what’s happening behind the scenes.

-Heather: Just naturally, and I’m not sure I’m a major contributor just yet, though I’d like to be! I’m just that chick who loves Halloween, and I help out at a friend’s farm every year to decorate baby dolls and spray fake blood all over. I dress up every year no matter what! I do collage art, and I try to do some creepy stuff. I have a whole table in my room–the “creepy and weird” table–that is full of stuff people have just given to me over the years. It’s so full I had to start putting things on a shelf! I consider that table art…I have set it up just so. I did a collage of dripping blood and eyeballs…my door is covered in signs about zombies, Halloween, and other witchy things! It’s definitely interesting being on the Island, especially as a woman, with a lot of tattoos and funky dress…there are not many of us.

-Heather: No explaining! I think, because of the way I look, people just sort of expect it. I’ve done some crazy things in my life, and I seem to get away with it. Of course, you have to have the proper attitude–I AM freaky, I like it, if you don’t, fuck off.

-Heather: I think having a “women in horror” month is fantastic! From the actresses, to directors, to artists, to fans, who have made the genre what it is. And I am definitely still learning, but highlighting the fact that women have made a SIGNIFICANT impact in horror, is important.

-Heather: Hmmm…role model. You know, I never realized how big a deal it was for a woman to be in horror. I’ve just sort of plodded along, sticking my hand into lots of different cookie jars, without thinking much about it. My biggest influences in life actually come from musicians, as I am one as well. when I think of female role models, then I can pick out several, stevie nicks, cat power, the runaways, hole..these women have POWER. They pour their hearts into their music.  Stevie has the best lyrics, and she is so witchy. I try to do my own thing…I think attitude can set you apart from the crowd. but as far as horror movies are concerned, Adrienne Barbeau in the Fog was amazing. That was one of the first horror movies I saw that there was a woman who wasn’t just screaming and getting stabbed to death.

-Heather: Definitely. Like I said, women are getting stronger and stronger in roles in movies and TV. American Horror Story is one of my favorites, and the women have very strong roles on that show. Also, there are more and more directors in horror than ever before…Mary Lambert, Mary Harron, Kathryn Bigelow, Amy Holden Jones, Karyn Kusama, Lynn Ramsay…all with fantastic reviews to back them. I usually just watch horror movies because I love them, but lately I have been seeking out more women-directed, women-featured films. Like the Babadook, Pet Semetary, We Need to Talk About Kevin…it’s something i need to keep researching.

-Heather: I think i pretty much answered this one…

-Heather: Women are going to continue to get stronger, and take over more and more movies…horror and otherwise. And it’s about time.

-Heather: I think it’s wonderful! In particular for horror. No one wants to JUST see slasher flicks, right? Or I don’t anyway. I love it when whole new ideas are birthed. I’m a huge fan of found footage films, and mockumentaries. I saw the Blair Witch Project when I was 5 months pregnant! I knew about it  already, but my brothers and the other friends we went with didn’t. They thought it was real, and I envied them because it would have been fun not to know too. Mockumentaries, are similar…thought not horror, Spinal Tap, was a great example. Bad Ben has spawned a zillion sequels. There is no end to people’s ideas, however strange. Thus, there is no end to what we will see in horror in the years to come.

-Heather: My favorite final girl was Marilyn Burns in “Texas Chainsaw Massacre. Favorite villain would be Baby from “Devil’s Rejects and House of 1000 Corpses”. That laugh…she’s so evil!! 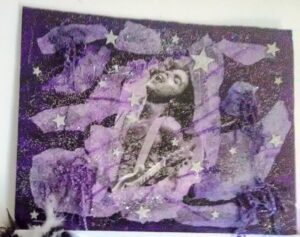 -Heather: I don’t really have much to plug. Hopefully I will soon!

@MVglittergirl
Azi Astrid Goodwin on FB
We would like to thank Azi for taking the time to answer our questions, but more importantly for her contribution to horror!

Exclusive Interview with Director/Writer of “The Answer” Iqbal Ahmed