“(S)he who is not courageous enough to take risks, will accomplish nothing in life.”  Muhammad Ali

My Baby Cries aims to be a visually & emotionally compelling piece of cinema, that explores the gruelling struggles of a young couples journey into parenthood. Tackling traumatic issues like; depression, miscarriage and infertility, this dark story follows the destructive psychological struggles that Sara and Abe battle. 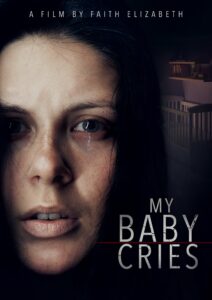 Written by Actress and Producer Faith Elizabeth, whose extensive Acting experience includes horror films “13 Graves” and “Philia”. She is also currently playing a leading role in horror musical comedy “Powertool Cheerleaders VS the Boyband of the Screeching Dead” by seasoned horror professionals Pat Higgins (Writer/Director) & Charlie Bond (Actress and Producer). Faith is also the founder of “Yes She Cannes”, a female empowerment campaign supporting women at the Cannes Film Festival.

“My Baby Cries” is an expression of pain that has profoundly affected my life. I suffered a miscarriage at 21 years old, it was so traumatic loosing my baby. It broke my heart. I cried for months and I struggled with depression, as many people do in a similar situation. Then last year my Sister and my Best Friend tragically lost their babies in the same week. It was a very dark time, supporting some of the people I love the most suffer so much pain and knowing exactly how they felt. Following this my friend sadly struggled to get pregnant again, she was having fertility issues and she was even looking into IVF.

I am so passionate about this film, as I hope it sheds light on the very real pain that millions of people face. I am excited (if a little nervous), taking on such a huge topic. I feel so much responsibility- especially as this will also be my Directorial debut”.

Donating isn’t just about supporting them financially, you’ll become a crucial part of their success.

Support their film to get priority access updates, exclusive content as well as selecting perks like owning a piece of the film as a signed prop or piece of costume or joining them for a Q&A Zoom Party Screening.

You can support them here:

This story aims to shed light on the despair, desolation & heartache that millions of people struggle with every year. Challenging preconceptions & questioning prejudices through compelling storytelling, that leaves a lasting impact.

The World Health Organisation reported in 2020 that 264 million people globally are suffering with depression and 186 million people are struggling with fertility issues. Tommy’s, the UK charity largest pregnancy loss charity reported that 1/4 pregnancies end in loss of life, either through miscarriage or stillbirth.

The COVID-19 Pandemic has severely affected the Film Industry, yet many creatives have lacked proper Government support ,with many creatives not qualifying for the self employment scheme. Through this film, we are offering paid opportunities to help get people back into work, while creating a platform to showcase their exceptional talent.

We are taking all the essential COVID precautions in order to keep our team as safe as possible during these challenging times, including lateral flow testing, relevant PPE & working with a compact team.

The “My Baby Cries” team are a diverse and inclusive cast and crew, supporting equal opportunities to assist everyone involved with progression of their careers.

Faith has an extensive list of film credits including appearing in horror films “Philia” and “13 Graves”. She also starred in dark comedy “In Flight’ and period drama “The Trial of Rebecca Worlock”. She is currently filming on horror musical comedy “Powertool Cheerleaders VS the Boyband of the Screeching Dead”, playing a leading Cheerleader role of gothic mother, “Mackenzie”

Shaq is a strong, dynamic Actor who graduated from Arts Ed. in 2017. He has impressive theatre credits including performing at the National Theatre, Queens Theatre and The Young Vic. His film credits include “Carnivore Werewolf of London” and “Lucid”.

Megan is a professionally trained Actress & Singer, with extensive Commercial experience. She is currently playing a leading Cheerleader role in “Powertool Cheerleaders VS Boyband of the Screeching Dead.” Megan has also achieved 3 Top Ten singles in the Apple Country Music Charts.

Benjamin Thompson (DOP) has worked on a wide variety of projects in the UK and Internationally, including commercial work for BBC, L’Oreal and the NHS and narrative work on “Invasion of Planet Earth”, “Clownface” and “Winter Ridge”.

Taylor Rae Papworth is an extremely talented Sound Recordist and Sound Designer. They are known for delivering exceptional quality on notable films such as “Original Gangster”, “Cannibal Lake” and “Turn off your Bloody Phone” for FrightFest.

Associate Producers include US born Leigh Trifari and Charlotte Laura Boundy. Leigh Produced short horror “Jimbo”and TV series “The Nightriders”. She is also an Actress, having co-starred in the award winning feature “I Scream on the Beach!”. Charlotte has extensive experience writing proposals & raising funding, in addition to founding a company of Executive and Personal Assistants, “EaPaCreative”. She is also an experienced Theatre Actress with notable credits such as performing for “Harry Potter Universal Studios, Japan”.