Hannibal for Dinner Essays on America’s Favorite Cannibal on Television

“A deep rumination on a show I’m really proud of.  For fans or new fans, these essays will make you think about what the show’s storytelling and representation really mean. Fannibals or even those new to Hannibal will find analysis and commentary that makes them think differently and more deeply about the show. A lot to savor here.” 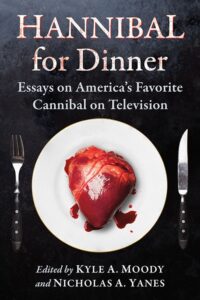 Summary: Bryan Fuller’s and NBC’s Hannibal only lasted for three seasons, yet it became a critical darling and grew a ravenous fanbase that remains active five years after the show ended. Hannibal is the very definition of a cult show, one that only grew in stature after its unfortunate cancellation. Even when placed in context with Thomas Harris’s popular novel and Academy Award-winning film series, Hannibal stood out as a singularly artistic experience. When it arrived back on Netflix in the United States in 2020, it shot into the Top Ten and immediately sparked discussion of a possible cast reunion and new seasons. Fortunately, academics had already spent years writing scholarship linking Hannibal to changes in television production, mythological interpretation, food culture, and pop psychology, and now there is an edited collection that combines academic and insider production perspectives.

In the wake of the show’s return to popularity through Netflix streaming, Hannibal for Dinner is being published by McFarland & Company, Inc. To celebrate the show’s legacy and to produce new groundbreaking scholarship, Doctors Kyle Moody and Nicholas Yanes have collected one-of-a-kind academic articles and interviews in their manuscript, Hannibal for Dinner: Essays on America’s Favorite Cannibal on Television. The book is a delectable taster for general audiences and academics alike, great for dinnertime conversations of all type.

These interviews and academic essays explore the Hannibal franchise, its evolution, creatively bold risks, mythology, a culture of killers, and how to be an entertaining host when having friends over for dinner. (Well, the last one is a joke for the Fannibals.)

Hannibal for Dinner: Essays on America’s Favorite Cannibal on Television

Kyle Moody, Ph.D. is an associate professor of Communications Media at Fitchburg State University in Fitchburg, Massachusetts. He explores online communities, information sharing practices, user generated content in games and social media, and the convergence culture of information production. His work has been featured in Springer and Iowa Journal of Communication.

Nicholas Yanes, Ph.D. examines the entertainment industry as an academic and corporate consultant. His dissertation explored the corporate history of EC Comics and Mad Magazine, and his first book analyzed the relationship between President Obama’s 2008 campaign and popular media. As a freelance writer he has contributed to CNBCPrime, Casual Connect, GameSauce, Sequart, MGM’s Stargate Command, and ScifiPulse.