She Rises at Night by Jae El Foster 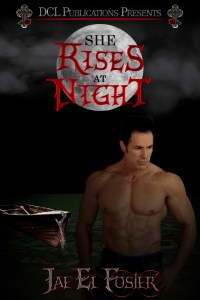 Known to his fans as the Master of Madness, bestselling author Jae El Foster makes his return to long-form horror this spring with the release of his ‘killer’ novel She Rises at Night.

“She Rises at Night is best described as a love story between an unhappily married couple… but with zombies, cannibalism, murder, and the Book of Lucifer,” he says of his epic-length book.

Foster’s novel offers an original take on the zombie genre, with a blend of the greatest elements of horror. He says there are equal amounts of psychological terror, occultism, and serial killing mayhem woven together to not only set the stage for the intertwined contemporary drama between the lead characters, but also to set the tone for the zombies.

“These are not your classic Night of the Living Dead zombies,” he says of his creatures. “While my zombies still hunger for human flesh, their existence is very much the result of the House of Horrors that serves as the backdrop for the book. I find it hard to consider them as the villains of the book. The true villain, I believe, is their creator.”

She Rises at Night follows married couple Bob and Karen Granger on their move from Connecticut to an old rundown seaside farmhouse in Europe. The move is a last-ditch effort to rekindle their marriage, but from the moment they arrive at the house, things between them become progressively worse. Paranoia begins to settle into Karen, and her trust toward her husband fades away completely.

Foster explains that while Karen and Bob both serve as the novel’s protagonists, they also serve as two of several antagonists that include the likes of Bob’s twisted and bitter mother Ethel and the former caretaker of the house Mr. McDougal.

“Ethel is indeed one of the greatest and wickedest antagonists of the novel and perhaps one of the best ‘villains’ I’ve ever created,” he says. “The untrustworthy aspect of McDougal grows after his intentions toward Bob and the house change and he sets his sights on Ethel. Like nearly everyone in She Rises at Night, neither Ethel nor McDougal can be trusted.”

The Book of Lucifer also plays a key role in She Rises at Night, and it was a book with a back story that Foster had to create with extreme care. “In a daring move, I had to give examples of the book’s abilities, and that included rewriting Biblical history and the resurrection of Christ. This is perhaps the most controversial scene that I’ve ever penned.” He goes on to say, “The abilities of this horrifying book are fully realized in a lengthy flashback to the eighteen hundreds when it first falls into the hands of Doctor Wilfred Longfellow, the original resident of the farmhouse. While moments of Bob and Karen’s life together in the house might have occasional flickers of light and humor at times, this flashback is written through pure darkness and takes the reader into a whole new level of fear.”

If you’re looking for a book that is filled with psychological terror, shocking murder and gore, uncomfortable moments of surprise and realization, and a young zombie named Charity whose hunger is endless, She Rises at Night is the book for you.

Jae El Foster is most known for the bestselling paranormal romance Restless and the gothic horror tale Where the Demon Is, as well as his acclaimed collection of frightening fairy tales Madame Howell’s Book of Very Bad Things. Making a turn to horror, the cover model is the famed ‘Italian Stallion’ of romance novels and Playgirl Magazine’s 2007 Man of the Year Julian Christian portraying Bob.

She Rises at Night is on presale now at Amazon, Kobo, Barnes and Noble, Smashwords and more in all electronic formats. It will be available in print at its official release on April 23, 2021, and is currently in production for audiobook format. It is published by DCL Publications. To learn more and read a free excerpt, visit www.thedarkcastlelords.net/sherisesatnight.