A mother who will do the impossible to find her son, even if it costs her to go through hell itself. In the words of its director: “a terrifying story that grows both in suspense and strong emotions at all times … causing the truth of the film to be revealed in an absolutely unexpected climax, a climax that will be like a dagger to the heart of each spectator “. 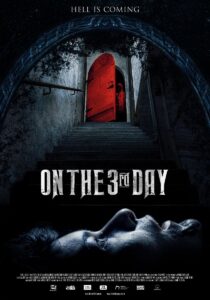 Synopsis
Cecilia and her son embark on a journey. On the third day, she is found wandering alone, not remembering what happened during this time. She is desperately looking for her son and finds herself wrapped in a brutal hunt, carried out by a religious fanatic, whom she faces off against. To her, he’s a lunatic. To him, Cecilia is the enemy.

Daniel De la Vega is a benchmark in Argentine genre cinema. He is the director of the titles Jennifer’s Shadow, Death Knows your Name, White Coffin and Necrophobia, among others. The genre-loving public has been able to see his work in different media, including premieres in cinemas, broadcasts on national and international channels and his titles White Coffin andNecrophobia were available on Netflix. He is currently developing his new feature film El Último Hereje.

THE POWER – Available on VOD, Digital HD and DVD on September 21