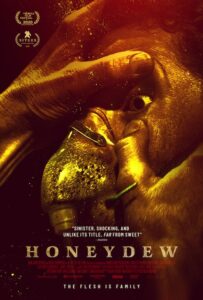 To celebrate this release of the film, we had the pleasure of speaking to “HONEYDEW” actress Malin Barr. She plays the role of Rylie opposite of Sawyer Spielberg who plays Sam. We talk with her about how she got the role, working with this cast, some of the challenges, a birthday surprise, an interesting fact about the music, and much more…

DON’T GO OUT THERE