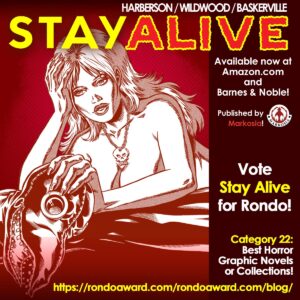 The heroine, actress Jane Morgan, has descended from an Oscar-nominated film debut into personal misadventures and Z-grade, T-and-A slasher flicks.  Desperate to rescue her career, she provokes uKill, a mob-justice entertainment consortium that murders whomever its website patrons choose by popular election—literally anyone, anywhere.  Jane becomes uKill’s target by spoiling the last-wish pro baseball adventure of Corky Sprague, a terminally ill child.  She then parlays her calamity into a starring role on Stay Alive.  It’s a reality TV show about her attempts to avoid being uKilled. 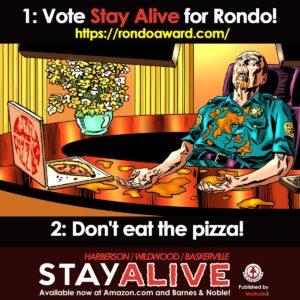 “Stay Alive examines mob justice.  Mobs terrify me.  They validate hatred.  They obliterate reason and human dignity by weaponizing fear and hyperbole.  And, as James Madison observed, the mob is in all of us: “In all very numerous assemblies, of whatever character composed, passion never fails to wrest the sceptre from reason. Had every Athenian citizen been a Socrates, every Athenian assembly would still have been a mob.” – James Harberson