-PH: Sir, what part of the country do you call home?

-Arvi: I have lived in Houston for twenty-two years and I call it home, but I was born and raised in India until the age of twenty-one.

-PH: And is that where you shoot most of your flicks?

-Arvi: Houston, yes, that is correct. Even the feature film – although sci-fi – was set in rural west Texas. But that’s actually what made Cerebrum a unique film, staying away from the usual “spic-and-span lab in urban setting”.

-PH: Was the goal always to direct movies or did you start out doing something else?

-Arvi: I have a BS in Mechanical Engineering and MS in Computer Science. I was on a path to the Geek Hall of Fame before I caught the movie-making bug by way of a happy accident. Graduate school required me to take a minimum number of credit hours to qualify for a tuition waiver. No required computer science courses were available one particular semester, so I signed up for a theater acting class. What began as a filler class ended as a lifelong interest. Several private classes in LA and Austin followed. While acting in several short films and feature films, I fell for the mechanics of filmmaking and went on to create short films. They led to my first feature film – Cerebrum. 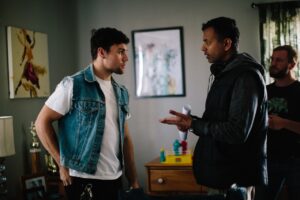 -PH: Tell us about the inspiration for the script?

-Arvi: While ordering Christmas gifts on Amazon a few years ago, I realized the company recommended products based on my purchasing behavior. The notion of a computer predicting my buying habits intrigued me. I wondered how long after my death the predictions would continue. The idea contorted to become a thought experiment about the effect of digital memory existing beyond a body’s death.

-PH: They don’t make movies like these anymore do they?

-Arvi: Films like Cerebrum have become a rarity. Hollywood has turned itself into a superhero film factory aimed at producing movies with stories meant only to serve CGI and action sequences. Don’t get me wrong, this feeds the “business” part of show business. Thankfully, there remains an audience for movies with stories as the centerpiece and all else exists to serve the narrative. A case in point is one of my great inspirations, Ex Machina.

-PH: Did you sit down with the classics and rewatch them as part of your research into the script?

-Arvi: There are definitely a few movies I rewatched while writing Cerebrum. Ex Machina for its clean execution, The Girl with the Dragon Tattoo for its suspense, and Hell or High Water for the color palette. A definition for “classic” is “judged over a period of time to be of the highest quality and outstanding of its kind,” so, absolutely, I drew from them and I always will. You learn the rules first before you break them.

-PH: And what do you hope the film does for your career?

-Arvi: A lifelong career in filmmaking is absolutely my goal. I hope Cerebrum is but the first of many thought-provoking films I share with the world. Right now, I am at different stages of progression with concepts for three more features. Yes, they are all science fiction. Can’t get the geek out of me!

-PH: What’s the best piece of independent filmmaking advice you can offer others reading this article?

-Arvi: Know what you want. If what you wish to do is tell great stories, then worry about the elements of story: structure, plot, and theme. Don’t fall victim to the allure of cool-looking camera gear. Fame is great, I guess, but if you remain true to yourself while building your brand, regardless of monetary returns, the finished product will reflect your integrity and serve you well.  Trust your vision. If uncertainty holds you back from taking the feature-film plunge, just pick up your cell phone and make shorts. Even after making eight short films, I was still unsure if I could make a feature film. Once I made the commitment though, I simply (well, not always simply) cleared one hurdle at a time, always moving toward the finish line.