Writer Blake Sinclair goes away for the weekend to the small town of Northdale to stay in a cabin and finish writing her book, with plans to meet her husband days later. Unaware that a madman, killer has escaped a mental hospital. He returns to his home, coincidently, the same cabin where Blake is staying in Northdale. The Killer toys with Blake and must be stopped but will her husband make it in time to save her?

Directed and written by: Corbin Timbrook 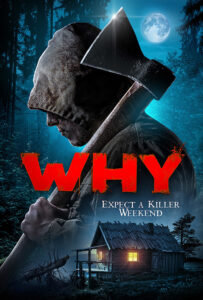 Ahead of the film’s VOD release on May 4th, we got the opportunity to talk about the movie with director/writer Corbin Timbrook. Take a few minutes to find out his inspiration for the film, being a huge horror fan, the death scenes, the cast, and more… 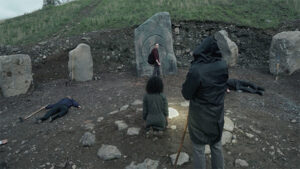 -PH: Tell us about the inspiration for the script?

-Corbin: I have always been a big fan of horror/thriller’s that lean on the thriller more than the slasher as in my films, ESCAPE ROOM and DO YOU SEE ME? I love to camp and a lot of my films have been written fire side in remote campgrounds. There’s something about isolation and voyeurism that is really creepy. The thought of being in a tent and vulnerable. Yikes!

-PH: Is the slasher genre a favorite of yours, or was it just something you wanted to explore in this movie?

-Corbin: No, I’ve always been a huge horror fan. When I got into filmmaking, it was easier to make this kind of film on a super low budget as it’s ALWAYS the story that is the star. I then had the opportunity to work with the great Roger Corman and then got endorsed by Tobe Hooper. Then I gradually started getting recognized for making these kinds of films.

-PH: The why or lack of why… is that the biggest difference between your killer and others?

-Corbin: I am a big fan of Ambiguity! I want the audience to come along for the ride and make up their own ideas and back story of this killer. I’ve done it in a number of my movies and I think it’s effective. I don’t want to use the third act to explain to the audience what they just watched and hopefully felt. 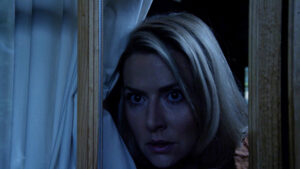 -PH: The killer is pretty brutal. What was it like creating some of those kills?

-Corbin: Some were inspired by true events from things I had heard about or read about but for the most part sitting in a coffee shop and creating gnarly ideas.

-PH: Were the death scenes the biggest challenge during filming? Any unexpected challenges happen once filming started?

-Corbin: No. I like to be well prepared before we start principle photography. My DP, Larry McKee, and I go over it again and again to make it as seamless as possible. It’s also really fun!!

-PH: How did this cast come together?

-Corbin: I am an Actor so I wanted the best people for all roles. I had worked with Natasha Henstridge, Lance Henriksen, Chris Browning and Emma Bell before. Shelby Janes was cast in the deputy Talley role after it was changed to a female character which I was very pleased I did make that change.

-PH: Allison Actee’s character ends up being the big focus of the killer. What was it like working with her specifically and getting her character through the fight to survive?

-Corbin: She was great! She was well prepared and “went for it” in every scene. She brought a lot to this film and I’m very thankful.

-PH: Did the pandemic delay the release of the film? How excited are you that audiences will finally get to see it?

-Corbin: Yes it did!! I was hoping it would have been released during the lockdown but I am so excited it is going to be seen now. Very excited.

-PH: And finally, your chance to promote the film. Why should fans see it, and what should they expect from it?

-Corbin: This film is relentless! From the start to the last frame, you will be on the edge of your seat. Good ole’ school terror.

We would like to thank Corbin for taking the time to answer our questions. Again, the film will be out on VOD May 4th, so please make sure to check it out! You can find more information at http://promotehorror.com/2021/04/20/nothing-like-a-little-stalk-and-chase-why-coming-to-vod-may-4/