In yet another move to expand their digital footprint for their ever-growing and popular library of diverse horror films, indie genre distributor TERROR FILMS is heading to the premium AVOD platform CRACKLE!

Owned by Chicken Soup for the Soul Entertainment Inc., Crackle Plus owns and operates ad-supported VOD networks CRACKLE and Popcornflix. This makes Crackle Plus one of the largest AVOD streaming platforms in the U.S. Crackle Plus has over 80,000 hours of content available across all its networks. As well, Crackle Plus premieres at least one original and one exclusive program each month, setting it apart from other AVODs.

TERROR FILMS’ President Joe Dain has spoken of this recent partnership. Dain says of the increased exposure: “we’re very excited to be working with Crackle. It’s a great opportunity for these fantastic indie horror films to garner a massive level of exposure on this respected AVOD platform.” 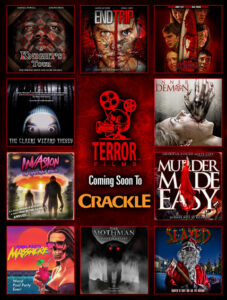