The history of the UFO Phenomena involves more than UFOS and telepathic aliens. There’s also, The Men In Black. Wikipedia describes them as, “men dressed in black suits who claim to be government agents who harass or threaten UFO witnesses to keep them quiet about what they have seen”.

Earths Dreamland offers an early release of their new alien breakout movie, The Alien Report, where a troubled 18 year old is being stalked by ominous black cars, in connection with his claims of being a lifelong alien abductee. As retribution, the teen outfits himself with concealed, micro cameras and follows these cars hoping to expose whatever hides behind their blacked-out windows. 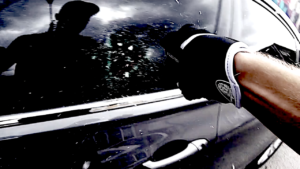 “It’s a bit crazy, this angry kid rides his bike up to these spooky, gangster-styles cars smashing out their windows” says Earths Dreamland partner, Michael Sell, “but there’s more to the story than Men-In-Black, his hidden cameras bring you into a new realm of alien disclosure”.

A former Senior Tech at NASA’s Jet Propulsion Lab, who test-screened the movie last month, commented on The Alien Report’s Facebook page, “this movie is fantastic, I’ve rented it two times, and will watch it again when I get a copy”. But be forewarned, The Alien Report doesn’t play like a traditional movie, it’s not for people looking for a Hollywood narrative, this is a gritty, street-level movie that plays like someone’s selfie-video.