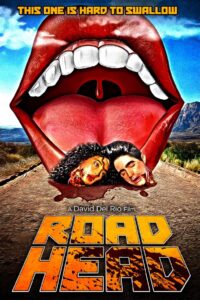 PH: What part of the country do you call home?

-PH: And is that where you try and work, for the most part?

-Damian: I try & work in all places. I’m a citizen of the world — & the intention is to have a global filmic career. Traveling is one of the most important things in my life.

-PH: Was the goal always to get into the film biz or did you start out doing something else?

-Damian: The goal was & has always been the same. I was a young Queer kid who was bullied a lot growing up. & film was my way into more colorful worlds — I could escape from this reality & step into other people’s lives. I could really go for it with my imagination! There’s nothing quite like an amazing cinema experience.

-PH: Tell us about the incentive for doing this one?

-Damian: So I was a server at a gay sports bar & grill called 33 Taps. & I really hit it off with this one regular (I used to smuggle her free drinks). & she asked me about my representation & my work, & at the time, was really struggling getting going in the game. It just so happened that she was working as an accountant onset with the casting director who was looking to cast an indie feature film. So it all just seemed to align.

Then, in the room for the callbacks, I was blown away & thrilled with the direction, intensity & intentions of the creative team. My costar Elizabeth was so powerful, my director David had such charisma, & when Clayton, Eli & I played & improvised together, we had the whole space laughing.

-PH: They don’t make movies like these anymore do they?

-Damian: Have they ever made a movie like this?! (no!)

-PH: Did you sit down with the classics and rewatch them before the shoot?

-Damian: There really are no movies similar to this one — I guess it’s almost more in the Scary Movie category of films? I was more focused on creating an original experience than I was on honoring the horror titans before us!

-PH: Has it been a door-opener?

-Damian: My friend described door-opening to me perfectly once — she said that this industry moves in invisible threads. & you’ll never know which opportunity came from which piece of work. You just keep going — planting the seeds & playing the stories & auditioning — and suddenly you’re walking through door after door not remembering how or why it’s open!

Logistically, I’m also taking this interview before the film came out. So… we’ll see!