There is a Zen teaching that if you meet God on the road, you must kill him. Kill God Ascend is the fifth full-length album from Australian electro-industrial band SHIV-R.

What the killing of God means to each listener will be a unique and personal revelation. In a world full of gatekeepers and figureheads whose only interest in you is to tell you what to do, illusions will need to be shed and those who profess to have all the answers will need to be confronted.

While not offering any answers, SHIV-R’s newest release comes with a statement courtesy of the album’s 6th track, “Empire.” “I’m on my own path.  Get the fuck out of my way.” 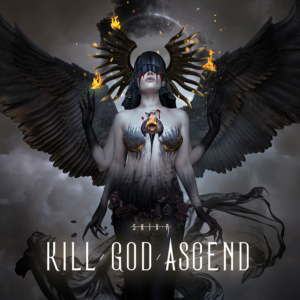 Kill God Ascend buries any criticism that the band has gotten less heavy with the full-speed aggression of “Borne From Hate” and the grinding power of title track, “Kill God Ascend”. Not only delivering heaviness, Pete Crane and Ben Bulig conjure emotively stirring pieces such as “Blue Turns to Black” and “Valley of Death” which incorporate acoustic instruments and modular synth experimentations. While “Spark” and “Promises of Armageddon” bring a melodic and memorable dimension to SHIV-R’s dark electronic style.

Since their debut album in 2010, Australian electro-industrial act SHIV-Rhave made an impact on the international dark alternative music scene and set themselves apart with a uniquely hard-hitting yet elegant sonic aesthetic. The group have toured extensively throughout over 20 countries including festivals in Europe and North America and have received heavy rotation on industrial dancefloors worldwide with their releases hitting number 1 on the DAC (German Alternative Charts) and top 10 in the GEWC (German Electronic Web Charts).

Over their five full-length albums and numerous EPs and singles to date, SHIV-R weave a dark, dynamic tapestry varying from the heavy electronic drive of international club staples “Eye of the Needle” and “Pharmaceutical Grade” to slower yet hauntingly captivating songs such as “Milk and Honey” and “Blood Rose”.