A new trailer for ROCK, PAPER AND SCISSORS, which debuted at Fantastic Fest and went on to win worldwide acclaim at FrightFest, Brooklyn Horror FF, Fantaspoa and more, has been released ahead of it’s July 6 digital and On Demand release. 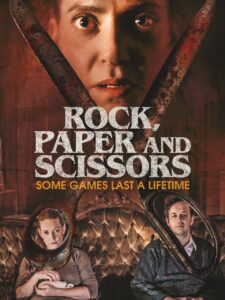 A dark thriller with elements of comedy and oozing style, the Argentinean horror film tells of siblings who have embark on a ‘bloody’ feud over an inheritance.

Martín Blousson and Macarena García Lenzi directed the film, which will get a full digital and on demand release next month from Dark Star Pictures.

Jesus and Jose Maria are siblings living in a closed-off world constructed of strange games and relentless madness. When their half-sister Magdalena returns home to inquire about her share of their inheritance, a strange and bloody affair ensues.

Trailers of Terror: “The Predator”