GETS PHYSICAL IN NORTH AMERICA 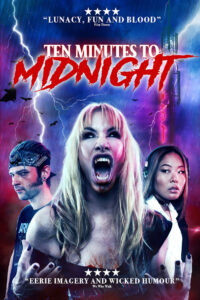 DANSE MACABRE and MVD are pleased to announce the North American physical release of Erik Bloomquist’s award winning vampire horror TEN MINUTES TO MIDNIGHT with a DVD street date of June 22nd and a Blu-ray street date of July 20th.

Caroline Williams (The Texas Chainsaw Massacre II) stars as a veteran disc jockey about to be replaced by younger model, Nicole Kang (Batwoman), but as she prepares her last broadcast she is bitten by a bat and transforms into a blood sucking vampire. William Youmans (Birdman) and Nicolas Tucci (You’re Next) add weight to an impressive cast.

“Audacious and thought-provoking. Feels like tuning into the future of indie horror cinema.”

This unique collectors edition comes with an abundance of bonus materials including a Behind The Scenes Featurette, Audio Commentaries and Interviews with cast and crew.

Fright fans can pre-order the DVD and Blu-ray now from Amazon and most other physical retailers.

Official Teaser and Posters for “Butchers”