International best-selling UK horror author David Moody returns to the world of his ground- breaking AUTUMN novels for a new trilogy almost a decade after publication of the last book. 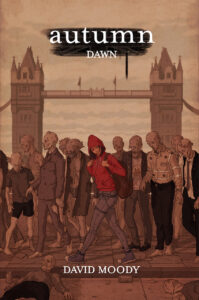 At the turn of the century, the AUTUMN novels redefined the zombie genre. Taking cues from the films of George Romero but adopting a far more grounded and realistic, low-fi approach, Moody’s dystopian series rewrote the rules of the undead and made them even more terrifying in the process. There are no zombie cliches here, just a handful of desperate survivors under constant attack from thousands, upon thousands, upon thousands of corpses. AUTUMN spawned a series of sequels and a low budget movie adaptation which starred David Carradine in his final screen appearance.

In AUTUMN: DAWN – the first book of the London trilogy – David Moody scales up the apocalypse by setting the action deep in the rotting heart of one of the most heavily populated cities in the world.

Two months ago, billions of people were killed by a deadly germ. Days later, they rose again in massive numbers. Since then, cities worldwide have become corpse-filled, rat-infested, germ-choked hellholes.

A group of people are trapped in central London, hopelessly outnumbered by the dead. They hear rumours of a safe haven in the north – a self-sufficient community where people from across the country have gathered to try and rebuild their lives. But the decaying ruins of thecapital are vast and sprawling, and they’re going to need an army to get away from thisplace.

There are other people here, waiting in the shadows to be found. Can enough of them band together to make a difference, or has the country – maybe even the entire world – already been lost to the dead?

About David Moody and the AUTUMN series

Frustrated by his experiences of publishing, in 2001 David Moody took a gamble that paid off when he began giving his books away online. These days you can download more free eBooks than you could ever hope to read, but back then the approach was revolutionary. And by chance, Moody timed it perfectly. The impact of his free books initiative was fuelled by the early boom in the eBook market and then, thanks in no small part to the success of films such as 28 DAYS LATER and the DAWN OF THE DEAD remake, the public’s revitalisedlove of all things zombie left him with a surprise hit on his hands. In just a few months, more than half a million copies of AUTUMN had been downloaded.

A series of sequels followed, as did a low-budget movie adaptation in 2008 which starred Dexter Fletcher and the late David Carradine in his final screen role. When Guillermo del Toro bought the movie rights to another one of Moody’s novels – HATER – his back-catalogue was snapped up by St Martin’s Press and his indie hits were thrust into themainstream. The AUTUMN series went on to sell hundreds of thousands of copies worldwide.

A decade or so later, and the world has changed beyond recognition. ‘That was why Iwanted to go back to AUTUMN,’ Moody explains. ‘We’re so much more connected than weused to be, with much more information at our fingertips. I think we’d deal with the zombieapocalypse in a very different way to how we might have in those pre-internet, pre-WALKING DEAD days.’

But these new books aren’t just an updated rehash of old themes. ‘I promised myself I’d only ever write more AUTUMN novels if I had the right story to tell,’ he says, ‘and I’ve definitely found it.’ A chance meeting in the middle of a chaotic, pre-pandemic, early morning rush-hour in London was the trigger. ‘AUTUMN has always been about how the handful of survivors cope when the rest of the population has died then becomereanimated as a result of some horrific, airborne virus. I couldn’t think of a better – or worse, depending on your perspective! – place to be than rush-hour London where people are so densely packed together. And, of course, since early last year the pandemic has added a whole new layer to just about every dystopian story.’

AUTUMN: DAWN (ISBN 978-0957656383) is published by Infected Books and is available now. AUTUMN: INFERNO will follow later this year, with AUTUMN: EXODUS wrapping up the series in 2022. Find out more about Moody at www.davidmoody.net.

“AUTUMN: DAWN is an unabated, unforgiving onslaught of intensity that takes aim at both the light and dark side of humanity. Like a punch to the gut, it knocks the wind out of you on the opening page and keeps you gasping for air until the very end.” —BookNest

“A triumphant return to the rotting world of AUTUMN and I cannot wait to see where the story heads next. 10/10” —The Rotting Zombie

“David Moody’s AUTUMN: DAWN breathes new life into my favourite undead series. Moody brings his trademark approach to a zombie world: interesting and realistic characters, organic conflict, and always, always, the dramatic and horrifying struggle to survive in a world overrun by the dead.” —Craig DiLouie, author of THE CHILDREN OF RED PEAK