Emmy® Award-winner Guy Pearce (Mare of Easttown) reprises his iconic role as Jack Irish, a former criminal lawyer, part-time debt collector and private investigator with a penchant for getting wrapped up in things he shouldn’t. The explosive final season delves deep into Jack’s past, questioning everything he thought he knew about his life and bringing him face-to-face with an antagonist more personal and destructive than he has ever encountered. Joining Pearce in this final journey are the series’ veteran stars Marta Dusseldorp (A Place to Call Home), Roy Billing (The End), Aaron Pedersen (Mystery Road) and Shane Jacobson (Guardians of the Tomb).

From Oscar®-nominated writer Tony McNamara (The Great, The Favourite), this heartwarming Australian medical dramedy returns for a fifth and final season. Former city heart surgeon Hugh Knight (Rodger Corser) seems to have finally settled into his bad-boy local doctor role in sleepy Whyhope, while the town is reeling from a temporary hospital closure and the local mining industry on its knees. With everyone looking to Hugh to save the day, even he wonders if he can step up and fight for his hometown.

A young girl is found killed at a camping resort and aspiring criminal psychologist Maja Angell (Hanne Mathisen Haga) believes that the police have arrested the wrong man. She’s not able to convince the police of that. Can she find the murderer before he strikes again? Acorn TV’s latest Scandi noir drama centers on the hunt for what turns out to be a serial killer. *Foreign Language, Norwegian with English subtitles

Atlanta’s hottest dancers transition from working in the club to life Beyond the Pole. Friendships are tested, finances are strapped, but together these ladies hustle to move Beyond the Pole.

TS Madison is a loud, brash & outrageous social media star with a huge following of adoring fans from her hilarious online shows, most notably, The Queens Supreme Court. Now she turns her sights to her next goal- to be the first black, trans woman to host a mainstream talk show. With a circle of friends that consists of a ragtag team, her mother, Ms. Mary, and her BFF reality star Tiffany “New York” Pollard, Madison is ready to go next level in this unscripted drama. Produced by World of Wonder. 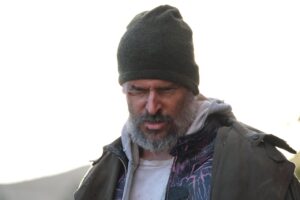 From RLJE Films, Archenemy is a superhero action film starring Joe Manganiello (True Blood, Magic Mike) as Max Fist, a man who claims to be a hero from another dimension who fell through time and space and lost his superpowers when he landed on earth. No one believes his stories except for a local teen named Hamster. Today, Max and Hamster take to the streets to wipe out the local drug syndicate and its vicious crime boss, The Manager. **Premieres as part of AMC+’s Comic-Con package

The gripping six-part revenge thriller stars BAFTA Award-winning actor Jared Harris (Chernobyl, Mad Men) and Cush Jumbo OBE (The Good Wife, The Good Fight). After learning the police investigation into the fatal hit and run of her young son Martie has been dropped, Frances Cairnes (Jumbo) takes matters into her own hands.

Five-part drama The North Water stars BAFTA-winner Jack O’Connell (Unbroken, Godless), Golden Globe®-winning actor Colin Farrell (In Bruges, True Detective), and SAG Award-winner Stephen Graham (Line of Duty, Boardwalk Empire), in this haunting, immersive drama based on the critically acclaimed, best-selling novel by Ian McGuire, and adapted and directed by Andrew Haigh (45 Years, Looking). Set in the ice floes of the Arctic in the late 1850s, the series tells the story of Patrick Sumner (O’Connell), a disgraced ex-army surgeon who signs up as the ship’s doctor on a whaling expedition to the Arctic. But the ferocity of the elements is matched by the violence of his crew mates, particularly Henry Drax (Farrell), a harpooner and distinctly brutal force of nature. The North Water was made by See-Saw Films for the BBC.

As fans gear up for the highly anticipated new season of The Walking Dead, AMC+ is offering an in-depth exploration of some of the series’ most celebrated characters with a series of specials, each charting the story of the zombie apocalypse from the point of view of a single character. Spotlighting Daryl Dixon (Norman Reedus), Carol Peletier (Melissa McBride), Maggie Rhee (Lauren Cohan) and Negan (Jeffrey Dean Morgan), each episode features new interviews and narrations from the actors that portray these iconic characters, interwoven with clips from the most pivotal moments of their journeys so far. Each episode will also feature an exclusive sneak peek of season 11. **Premieres as part of Comic-Con on AMC+ package

The Walking Dead: Origins lineup is as follows:

How does a man who is – literally – paralyzed by happiness find love? Thanks to a condition called cataplexy – a rare disorder that causes him to lose control of his muscles whenever he is overcome by strong emotion, particularly joy – Brooklyn librarian Charlie (Martin Freeman) has learned to carefully edit all delight triggering people, places, and events out of his life.

Winner of the Grand Jury Prize at Cannes Film Festival and a Golden Globe nominee for Best Foreign Language Film, the deeply moving film by the Dardenne brothers (L’enfant, Rosetta) delves into the emotional life of troubled 11-year-old Cyril (Thomas Doret). When his father abandons him, Cyril obsessively searches for his bicycle – placing his last bit of hope in this symbol of their relationship.

Christmas is supposed to be a time for peace and joyful family reunions. But when Matt (AJ Bowen) and his wife Karen (Susan Burke) show up unannounced at the home of his estranged brother Steve (Scott Poythress) to celebrate the holidays, they’re instead greeted with a horrifying surprise: trapped in the basement is a man – but not just any man. Scott believes his hostage is the devil.

A night of unimaginable terror awaits twelve-year-old Bobby (Lonnie Chavis) and his best friend, Kevin (Ezra Dewey), when they are abducted on their way home from school. Managing to escape his confines, Bobby navigates the dark halls, praying his presence goes unnoticed as he avoids his captor at every turn. With no means of calling for help and miles of dark country in every direction, Bobby embarks on a rescue mission, determined to get himself and Kevin out alive… or die trying.

After a mysterious group breaks into Laura’s home and attempts to abduct her eight-year-old son, David, the two of them flee town in search of safety. But soon after the failed kidnapping, David becomes extremely ill, suffering from increasing psychosis and convulsions. Following her maternal instincts, Laura commits unspeakable acts to keep him alive, but soon she must decide how far she is willing to go to save her son. Starring Emile Hirsch, Andi Matichak and Luke David Blumm.

Britain’s favorite gang of moms (and dad) is back for a third season of the comedy series Motherland, navigating the pitfalls of middle-class parenting and the complicated politics of the school gates. Its star-studded cast features Anna Maxwell-Martin, Lucy Punch, Paul Ready, Tanya Moodie and special guest star Joanna Lumley.

This series is the perfect mix of travel, food, friendship and wine as actors Matthew Goode (A Discovery of Witches), Matthew Rhys (The Americans), James Purefoy (Rome) and Dominic West (The Affair) celebrate this fascinating drink. Set in beautiful surroundings across Europe’s wine regions, we go on a journey to discover the stories and history behind the popular beverage. The show’s resident wine experts also travel the globe visiting amazing places, sampling some of the world’s best wines and meeting some of the greatest chefs working today. *Also streaming on Acorn TV

The Wine Show Season Binges are as follows: