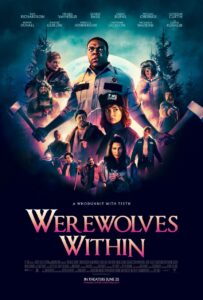 DIRECTED BY JOSH RUBEN (SCARE ME)

“THE MUST-SEE HORROR-COMEDY OF THE SUMMER .”

SYNOPSIS: After a proposed pipeline creates divisions within the small town of Beaverfield, and a snowstorm traps its residents together inside the local inn, newly arrived forest ranger FINN (Sam Richardson) and postal worker CECILY (Milana Vayntrub) must try to keep the peace and uncover the truth behind a mysterious creature that has begun terrorizing the community.

ABOUT THE DIRECTOR: Josh Ruben is an award-winning actor, writer, & director whose debut feature film SCARE ME which he wrote, produced, directed & starred alongside Aya Cash and Chris Redd premiered at the 2020 Sundance Film Festival. As one of the founding members of CollegeHumor’s “Originals” team, Ruben directed and/or starred in thousands of shorts, amassing views well into the billions. Josh directed (and cameoed) in all 10 episodes of Funny or Die & Spotify’s narrative podcast series, THE LAST DEGREE OF KEVIN BACONstarring Bacon as himself. Josh’s second feature film WEREWOLVES WITHIN, a horror/comedy from Ubisoft starring Sam Richardson, is coming to theatres (!) June 25th, 2021, & will be distributed by IFC Films. You can watch SCARE ME now on SHUDDER or VOD!