THE BIRD WITH THE CRYSTAL PLUMAGE [4K Limited Edition] (7/27)

On July 6, Arrow will kick off its July lineup with the release of Threshold. From the directing duo of Powell Robinson and Patrick Robert Young, Threshold is the story of a girl that believes she is cursed and convinces her brother to head out on a cross-country road trip to break the curse. The film currently holds an 83% on Rotten Tomatoes, with Naila Scargill of Exquisite Terror calling it “an impressive slow burner that develops beautifully through to a spine-chilling climax, with unexpected, shocking results.” The Blu-ray release comes with two audio commentary tracks, a feature-length documentary on the making of the film, and more.

July 27 will be a big day for Arrow fans with the release of two box sets and one new UHD title. First up is Vengeance Trails: Four Classic Westerns. The set includes four spaghetti westerns starring some of the genre’s biggest stars. In Lucio Fulci’s Massacre Time, Franco Nero stars as a New Mexico prospector that returns home to help his drunkard brother save the family ranch from a businessman and his sadistic son. Robert Woods stars in My Name is Pecos from director Maurizio Lucidi. Woods plays a Mexican gunslinger that squares off with the man that killed his family. Enrico Maria Salerno is a gunman that seeks revenge on a former pupil in director Massimo Dallamano’s Bandidos. Rounding out the set is And God Said to Cain from director Antonio Margheiti. Klaus Kinski stars as a recently released prisoner that tracks down the men that framed him. All four films all restored in 2K using the original 35mm camera negatives. The 4-disc limited edition set includes an illustrator collector’s booklet and a fold-out double-sided poster. 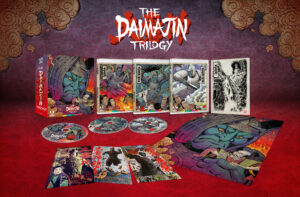 The second box set coming on July 27 is The Daimajin Trilogy. This limited edition set includes all three films in the Daiei series – Daimajin, Return of Daimajin, and Wrath Of Daimajin. The series takes the Golem legend and places it in 16th century Japan. The films have frequently been overlooked, but fans of the films have frequently placed them amongst the best the kaiju genre has to offer, praising the outstanding special effects. The set includes a 100-page book featuring essays by Jonathan Clements, Keith Aiken, Ed Godziszewski, Raffael Coronelli, Erik Homenick, Robin Gatto, and Kevin Derendorf. 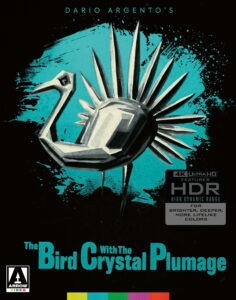 July’s final release is The Bird with the Crystal Plumage. This groundbreaking debut from Dario Argento is largely responsible for kicking the Giallo genre into high gear. Roger Ebert praised the film, saying it’s “what thrillers are all about,” while Bloody Disgusting dubbed it a “flawless debut.” Tony Musante stars as an American author vacationing in Rome when he witnesses a terrible murder, but things aren’t quite as they seem. This new release sees the Argento classic make the jump to Ultra HD with a brand new 4K restoration, courtesy of Arrow. This set includes an illustrated booklet featuring writings on the film and a fold-out poster.

Remake of ‘Don’t Look in the Basement’: Set to Star Ex-MISFITS Guitarist DOYLE