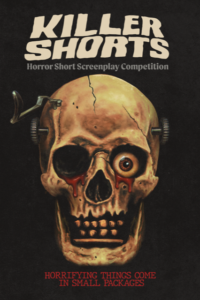 The Killer Short Contest celebrates horror short screenwriters from around the world, connecting them with managers, producers, and filmmakers. The Top 10 scripts will be read by a star-studded panel of judges, with over $5,000 worth of prizes up for grabs including Final Draft 12 screenwriting software, Shudder subscriptions, career consultations, memberships to Stan Winston’s School of Creative Arts, and a one-of-a-kind skull-shaped typewriter trophy, hand-sculpted and designed by celebrity FX artist Tyler Green (Syfy’s Face Off).

New to the competition this year, a budget-friendly ‘1 Page Horror Short’ category, with a locked-in $5 entry fee. Prizes include an all-access 1 year subscription to Stan Winston School, $500 cash, a 1 Year ISAConnect Membership, plus the highly coveted skull typewriter trophy.

“We recognize that shorter scripts have a slight disadvantage when it comes to impressing literary managers,” said Alison Parker, Contest Director, “So we are thrilled to introduce the new ‘1 Page Category’, with prizes geared towards helping the winner produce a horror short film.”

Season 1 Third Place Winner Chris Hicks signed with literary manager Peter Katz of Story Driven, after the success of his short script “The Butter Street Hitchhiker” landed him on Coverfly’s The Red List. Season 1 finalist Jeremiah Lewis’ script “The Rickety Man” was discovered by director Cameron Gallagher on the Killer Shorts website and is currently in post-production. Connor Savage was inspired to write a feature version of his Season 1 semifinalist script “Saskia”, which reached the Top 10% in the Academy Nicholls Fellowship and garnered him acceptance to AFI’s Screenwriting Conservatory, the #1 Film School in America. Alessandra Jara Del Castillo has had several meetings with literary managers since her First Place win in April, and is in talks with directors to produce her short “This Hunger”. 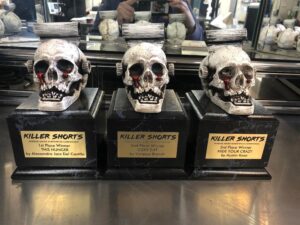 Entry fees for the main competition category start at $20 for ‘Early Bird’ entries submitted by September 3 2021, with a final deadline of December 17, 2021. Entries can be submitted via Coverfly, Filmfreeway or ISA.