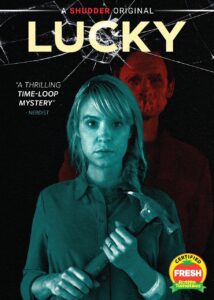 “John Carpenter with a side order of Kafka” – Horror DNA

RLJE Films, a business unit of AMC Networks, has picked up select rights to the horror film, LUCKY from Shudder, AMC Networks’ premium streaming service for horror, thriller and the supernatural. RLJE Films will release LUCKY on VOD, Digital HD, and DVD on August 3, 2021.

In LUCKY, life takes a sudden turn for May (Grant), a popular self-help book author, when she finds herself the target of a mysterious man with murderous intentions. Every night without fail, he comes after her, and every day the people around her barely seem to notice. With no one to turn to, May is pushed to her limits and must take matters into her own hands to survive and to regain control of her life.