RLJE Films, a business unit of AMC Networks, and Shudder, AMC Networks’ premium service for horror, thriller and the supernatural, will release SEANCE on DVD and Blu-ray on August 3, 2021.

Written and directed by Simon Barrett (You’re Next, The Guest), SEANCE stars Suki Waterhouse (Assassination Nation, The Divergent Series: Insurgent), Madisen Beaty (Once Upon a Time… In Hollywood, The Curious Case of Benjamin Button), Ella-Rae Smith (“Into the Badlands”, Fast & Furious Presents: Hobbs & Shaw), Inanna Sarkis (After franchise, 11.7 Instagram Followers, 3.8 million YouTube Subscribers), Seamus Patterson(“Channel Zero”, Run This Town) and Marina Stephenson-Kerr (“Channel Zero”, Cult of Chucky). RLJE Films will release SEANCE on DVD for an SRP of $27.97 and Blu-ray for an SRP of $28.96.

In SEANCE, Camille Meadows is the new girl at the prestigious Edelvine Academy for Girls. Soon after her arrival, six girls invite her to join them in a late-night ritual, calling forth the spirit of a dead former student who reportedly haunts their halls. But before morning, one of the girls is dead, leaving the others wondering what they may have awakened. 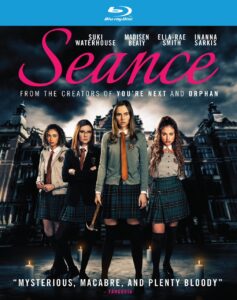