We’ve helped promote authors from all over the world, and now we can add the Philippines to that list. We couldn’t be happier to have found Alaric Cabiling, and his new book ‘Il Migliore Del Mondo & Other Stories.’ Let us introduce him to you in this interview below. Find out why how he got into horror, where the idea for book came from, what to expect from it, and a lot more… 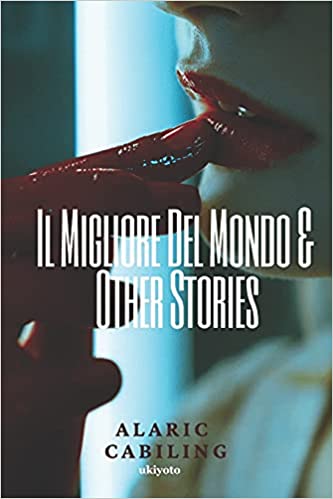 -PH: Before we get into the book, please tell us a little about yourself, and how you became an author.

-Alaric: Hi. My name is Alaric. I’m Filipino-American, and I currently reside in Manila, Philippines. I’m gay, disabled, and I love petting dogs and cats or giving them treats. I was always a horror movie buff. My brother Lex used to rent B-side movies all the time, and I used to miss sleep for days or scream when the lights go out during power outages when I was a kid. After I read Poppy Z. Brite’s book, Wormwood, in college, I decided to write horror fiction. I was also a big fan of Poe, so I also got in the whole goth culture thing in regards to music and poetry.

-PH: Why horror? What is it about horror that you love?

-Alaric: It wasn’t until high school, and I fell in love with dark music and art that I began seriously immersing in horror fiction and movies. I watched movies as a kid, but I didn’t develop a real fascination until I read Poe and Shelley, and I listened to grunge and metal in the ‘90s. I fell madly in love with dark gothic imagery—stuff like metal bands Cradle of Filth and Opeth’s music videos. As I developed a taste for other sub-genres in music, so went my tastes in literature and movies. Pretty soon, I revisited classics like Jaws, Psycho and The Shining. I read Clive Barker and Stephen King. I think that there’s a love for things forbidden in horror that stokes the fire for rebellion from all things conservative and conventional.

-PH: Do you think you would be writing if you didn’t love horror?

-Alaric: I would write dark fiction, dark fantasy, or bleak contemporary drama. I love writing, and I love almost anything highly literary despite my simpler narrative style.

-Alaric: Two or three years in the making now, the collection started out of a bigger superset of stories I’ve cut down to a smaller size after a lengthy revision process. The end result surpasses any expectations based on the initial drafts. Most of the stories here involve artists struggling to attain some critical acclaim and therapeutic catharsis from their most important work to date, and the more desperate they become, the bloodier and more violent the results. There are three novelettes and five short stories. The title story, Il Migliore Del Mondo, translates to “the best in the world” in reference to the character’s work as an artist. There’s a lovely ring to the translation serving as an alternate title, considering that these artists are about to embark on their most ambitious material yet, hence the bloodshed.

-PH: What sparked the idea for this book?

-Alaric: I started out experimenting with short fiction before writing novels and novellas this year. As such, I’ve compiled two collections’ worth of short fiction that I’ve worked hard to edit for two years now. This collection has an overarching theme just as the second one does, so I decided that they would be grouped that way.

-PH: The book is described as “Jeffrey Deaver’s Twisted meets Stephen King’s Night Shift.” Can you expand on that a little?

-Alaric: Jeffrey Deaver is really underrated as a psychological thriller author. His groundbreaking collection of stories, Twisted, presents several unique case studies in the genre under the short story format. My collection has some of these unique elements: mental illness in crime fiction; complex murder plots; magic realism. Stephen King’s Night Shift, on the other hand, brings supernatural horror to the mix. You know what you get with King: otherworldly terror; an ancient evil beyond the confines of this world manifesting in our reality. Combined, the elements from both authors’ work are placed alongside one another for an intense examination—which one is right or wrong, true or false? Magic realism makes it perfectly explainable or curiously fictional.

-Alaric: Bloody deaths with supernatural causes, or murders perpetrated by sick, demented individuals. Sometimes, it looks like it could be both.

-PH: What’s the biggest thing that all these stories have in common?

-Alaric: There will be blood. Without hemoglobin, there is no art. Red is one of the three most integral colors in the color wheel.

-PH: On the other side, what’s the biggest difference?

-Alaric: Mental illness plays a part in most stories, but no two stories have a similar diagnosis. 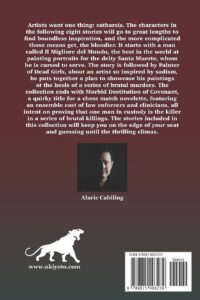 -PH: Is there anything specific you can tell us about the some of characters readers will find here?

-Alaric: The main character in the story, The Somatic Defilement, doesn’t introduce himself, like his name doesn’t matter. It could be any sex addict’s story—anyone who can’t figure out that the true excitement in relationships comes from closeness and intimacy. An intimate relationship also involves intimate sex, but this character who treats sex like leisurely activity also expects that sex will always be good for him, no matter the level of involvement. His naivete towards closeness is soon put to the test, and that test has mixed results depending on the motives.

Quirky characters like him are all over this book.

-PH: If readers could only read one of these stories, which one would you recommend?

For a longer story (novelette) with a complex murder mystery plot and supernatural horror elements, try Morbid Destitution of Covenant. It will keep you guessing until the end.

-PH: Here’s your chance to promote anything we haven’t talked about. Let us know something more about the book, other books, where people can find you, or anything else you would like to mention.

-Alaric: I have many WIPs, so I’m working on a bunch of new novels, novellas and short story collections. Follow me on Twitter at @alaricpcabiling and get updates.

We would like to thank Alaric for taking the time to answer our questions. Hopefully this gave readers a good introduction into his new book, and the bloody stories it holds. You can find it today on Amazon, and don’t forget to follow him on Twitter for what’s coming next!