A trio of horror from The Horror Collective is coming to Shudder this July. The uncensored director’s cut of Andrew Merrill’s ROT (July 20), which was not publicly available outside of the festival circuit. Jeff Ryan and Arielle Cimino’s Halloween-themed horror-comedy MASS HYSTERIA (July 20), and the anthology series of stand-alone horror episodes directed by women, ETHERIA (July 26), inspired by the Etheria Film Festival’s innovative programming.

Produced by Beth Crudele (Side Hustle, The Gift, Fuller House).

When Madison’s ex goes missing, his friends expect her to lead the search to find him. But something vile has taken over his body, and what they find is worse than any of them could have imagined.

The series is produced by Heidi Honeycutt and Stacy Hammon, and from executive producer Shaked Berenson. 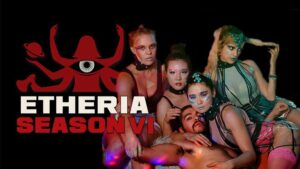 Trailers of Terror: “The Strangers: Prey at Night”