Filmed on location at the prestigious Black Hangar Studios

Jamie McLeod-Ross & Charley McDougall founders of British production company Empire Studios are the producers and exec producers of CANNIBAL CABIN, LEGEND OF THE LIZARD-MAN and DEATH RANCH. The boys had a very busy 2020 with Neil Marshall’s, (Descent, Centurion, Game Of Thrones) latest feature ‘THE RECKONING” which had a cinematic release across 178 screens in the USA 2021 and currently released in the UK and rest of the world on DVD, Theatrically and on Digital platforms.

“We’re all a bit CROOKED inside.”

Logline: A trio of ghost hunters set out and search for the infamous Crooked Man after finding the co-ordinates on the dark web.

Synopsis: Long has the myth of the Crooked Man (LEE HANCOCK) been floating around on the east coast of America, dating all the way back from the children’s nursery rhyme of the 1800’s. It’s a tale long told, but with few lucky enough to tell the story… The small town of Marion County residing in Florida know it well but it laughed off by many of the residents as nothing more than a scary story to tell around the campfire.

After Gina (GEORGINA JANE) suffers a series of night terrors brought on by the tragic loss of her father, Jimmy (MATTEW BAUNSGAURD), in a fatal plane crash some 3 years prior. Gina looks to her boyfriend Justin for comfort on the eve of the occasion. 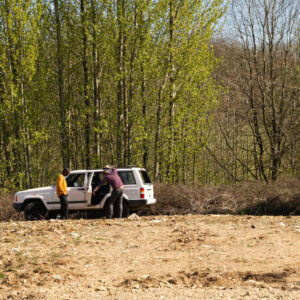 Justin (ERIC JAMES GRAVOLIN), already having promised to go along with his clueless yet oldest friend Darry (ANTON RICE) on what would be their final ghost hunt, (that is unless Darry finally has a lead that unearths some real paranormal activity), gets swayed into letting Gina tag along for the ride so she wouldn’t be alone.

Darry recently has plunged himself into the dark web in order to get a tip off on the exact coordinates of the mysterious “Halliwell Estate”, better known in urban folklore as ‘The Slaughter House”. Here, he comes across an alias online using the urbexer portal “The Orchard” whom assured him that he would not be disappointed. Darry, making a desperate last ditch effort to save his flailing social media ghost hunting page, not to mention his credibility amongst his friends, truly believes this will finally be the footage he needs to rub shoulders with the other great paranormal investigators and stick it to all the people that doubted him. Little did any of them realise that this road trip would be out of this world…. quite literally. The coordinates end up taking them through the woods and they come across a grand old abandoned plantation house, the “Halliwell Estate”, slap bang in the heart of the forest as if from out of nowhere, much to the bemusement of Gina who is vocal in her appeal against going inside.

Darry and Justin’s initial curiosity for what lies inside for them to discover, out ways Gina’s bad feeling she has about the creepy estate, with Justin assuring her that there is nothing to worry about, this is only to humour Darry. As they tentatively make their way around, derelict room by derelict room, it becomes all too apparent that this structure has enclosed many tragic moments, the clues from the mutilated drawings of families from yesteryear and the writings on the wall to “PUT ON A HAPPY FACE” with the eerie chiming coming from an ancient demonic music box. By the time Gina and Justin decide enough is enough it may already be too late. The opening of Pandora’s box has begun, the CROOKED MAN’S nursery rhyme has already been spoken and just like that the curse is once more upon those that inhabit the damned wretched estate. Now with the malevolent and seemingly indestructible force of the Crooked Man that relentlessly pursues them they have to find a way back from his realm back into their own or they will be succumbed to a lifetime of misery, torment, pain and if one of the unlucky souls is chosen as his very own conduit there will be no hope for them in this life or the next. There will be no hope for us all.