A double shot of news. First, my multiple award winning psychological horror thriller (BOX) is now available on the Kings of Horror network at the link below.

BOX tells the story of a man who accidently commits a murder frightened he dumps the body and rushes home only to find a large ominous wooden box on his doorstep..confused he drags the box into his house and from there descends into a downward spiral of madness and triggers a chain of events that has the man and the audience questioning their reality.

Box has won every major award including the Indie Spirit for lead Jimmy Dempster as well as several best Actor awards.

Second from the team behind BOX comes (THE MAID) the first ever  Netflix original film from Thailand. released last year overseas as an exclusive to Netflix the film now gets a release in the United States on bluray and digital August 17, 2021

Synopsis – A teenager Joy, works as a domestic maid and is haunted by the previous maid spirit, to discover the secret behind her death. 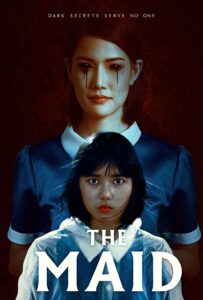