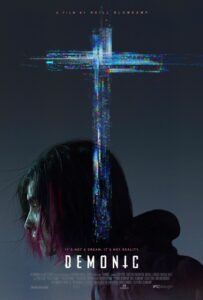 DIRECTED AND WRITTEN BY:

From the director of DISTRICT 9 and ELYSIUM, a young woman unleashes terrifying demons when supernatural forces at the root of a decades old rift between mother and daughter are revealed.

Volumetric capture is a new three-dimensional video technology that turns actors into geometric objects. For Neill Blomkamp’s DEMONIC, 260 cameras were arranged in a grid that captured the actors from all points of view. Three-dimensional environments were captured separately, and the geometric renderings of the actors were digitally placed into those 3D environments. The amount of volumetric capture in DEMONIC is about 15-20 minutes, and is the most ever seen in a feature film.

The Third Twin by Darren Speegle