A world of darkness, terror and madness, based on Lovecraft Mythos 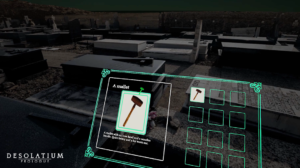 DESOLATIUM: PROLOGUE is a rst-person point & click Graphic Adventure based on Lovecraft Mythos.

Delve into the world of the dreamer from Providence like never before.

It all begins in the Massacre of the Innocents by the infamous King Herod. The player will walk in the shoes of Samara, a young woman who has just lost her child. Alone and desperate, she wanders around the desert, praying to her God. But who or what answers her call is something else. A very ancient being, the closest thing to a creator that exists in this world.

Play as you explore a city outside the limits of time and space. Meet mysterious characters who will guide you on your journey. Interact with the objects around you to solve complex puzzles in order to reach the terrible presence of a cosmic entity of immense power: Cthulhu.

Live the most immersive experience of DESOLATIUM: PROLOGUE with the VR version (for Oculus Rift S, Oculus Quest 2 and HTC Vive) or enjoy a more classic experience with the non-VR version (PC/Mac).

-Hyper-realistic graphics: All the levels have been generated by shooting real locations in 360o and with the integration of 3D elements in post-production.

-Ambisonic Audio (8D): It generates an immersive sound effect that seems to come from all around the player. You will only need your headphones to live this experience.

-Full immersion: DESOLATIUM: PROLOGUE will be available for PC and, if you want to achieve total immersion, you will also be able to use a Virtual Reality device (Steam and Oculus).

We are a VR development studio located in Murcia, specialized in the creation of immersion experiences and videogames. Virtual Reality allows us to expand our possibilities when designing and creating worlds, environments and experiences. This way we can tell stories in an alternative and more effective way. For this reason, we have decided to apply this potential to the VIDEO GAMES sector.

In 2016 we published our rst VR demo, reaching more than 15,000 downloads and becoming nalists in the “Samsung The Challenge: Best VR game developed in Spain” tournament. Our second project, DESOLATIUM, has already wonseveral awards, including the “Most Innovative Game of the Year” award, and is also among the four nalists for “Best Game of the Year” in the V Edition of the PlayStation Awards.