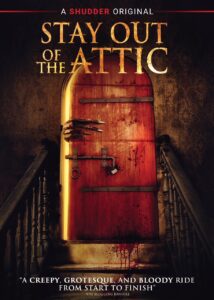 “pure high-octane tension…for lovers of the disgusting, ooey-gooey gore of things like Castle

“a creepy, grotesque, and bloody ride from start to finish…a ghastly good time” – The Blogging Banshee

“an intense, bloody thrill-ride…keeps you on the edge of your seat” – The Twisted Girl Next Door

Directed by Jerren Lauder (directorial debut) and written by Jason Scott Goldberg, Jesse Federman, Jerren Lauder and Julie Auerbach (“Charmed”), STAY OUT OF THE ATTIC stars Ryan Francis (Hell on the Border), Morgan Alexandria (Forever My Girl), Bryce Fernelius (12 Gifts of Christmas) and Michael Flynn (Wild Horses). RLJE Films will release STAY OUT OF THE ATTIC on DVD for an SRP of $27.97 and Blu-ray for an SRP of $28.96.