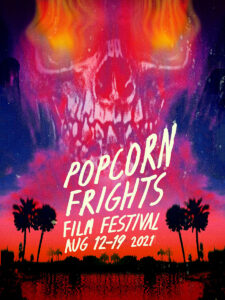 Popcorn Frights, the Southeast U.S.’ largest genre film event, is thrilled to unveil the second wave of programming for its virtual festival experience available nationwide. Running parallel to its in-theater program (August 12-15) and through the duration of the Festival (August 12-19), Popcorn Frights’ virtual experience is headlined by seven feature film World Premieres, including the frightening thrill ride THE ACCURSED, the chilling paranoid thriller DASHCAM co-starring Larry Fessenden, the Euro-horror inspired genre treat DAWN BREAKS BEHIND THE EYES, the claustrophobic nail-biter IT CAME FROM BELOW, the horror mystery NIGHT AT THE EAGLE INN, the devilish dark comedy VAL, and the made in Florida horror moc-doc THE WILD MAN.

Documentary feature films premiering at Popcorn Frights include the World Premiere of THE HISTORY OF METAL AND HORROR, a nostalgia trip of some of the most iconic horror films told through candid conversations with John Carpenter, Tom Savini, Kirk Hammett, and Rob Zombie, among many others; as well as the East Coast Premiere of WOODLANDS DARK AND DAYS BEWITCHED, the first feature-length documentary on the history of folk horror.

Other highlights in the feature film program include the US Premieres of Takashi Shimizu’s (creator of the Ju-on series and The Grudge) new nightmare HOWLING VILLAGE and the timely yet thoroughly unpredictable sci-fi-cum-survival-thriller TIN CAN, the East Coast Premieres of the morbid dark comedy KEEPING COMPANY, the gleefully creepy LAIR, and the boldly original THE YELLOW WALLPAPER; as well as the Florida Premieres of BLOOD CONSCIOUS, HOUSE AT THE END OF THE FOREST, and THE LAST MATINEE.

Complimenting Popcorn Frights’ feature film program is its first-ever Virtual Reality experience created in partnership with the O Cinema, an independent non-profit based in Miami. Hosted on AltSpaceVR, the Virtual Reality environment features live events and an exclusive selection of short films premiering in this one-of-a-kind digital experience. Visitors have the opportunity to fully explore the VR world, walk the red carpet and even fly through the space before entering each designated portal to view the short films. The AltSpaceVR platform is free to all audiences and available through Quest or STEAM headsets or on PCs.

Leading up to the 2021 festival, Popcorn Frights is hosting a three-week summer film series under the stars in partnership with the City of Miami Beach. Running across five different public parks in the city from July 22 through August 5, the family-friendly program features genre classics, family favorites, and exciting blockbusters, such as Beetlejuice and The Little Shop of Horrors, and is available for all community members to enjoy for free. The program is dedicated to bringing the South Florida community together after the tragic building collapse in Surfside, FL.

Diving into the 2021 Film Festival program by the numbers, Popcorn Frights’ audience will experience a lineup boasting of a record-setting 68 film premieres in-theater and virtually, including 26 World Premieres, 3 North American Premieres, 3 US Premieres, 8 East Coast Premieres, 5 Southeast US Premieres, and 12 Florida Premieres.

Popcorn Frights’ virtual offerings are geo-locked to the United States and are available to view on the Eventive platform until August 19. The Eventive virtual platform functions on multiple internet browsers as well as Roku, Apple TV, Chromecast and other connective devices to ensure the most wide-reaching compatibility, as well as comfort for viewers. Access to virtual film screenings is available through individual tickets or an all-access virtual pass, which provides an all-inclusive experience for the festival’s entire virtual program. Separate individual tickets and all-access badges are also available for Popcorn Frights’ in-theater program, which is exclusively hosted at the Silverspot Cinema Coconut Creek. To order an In-Theater All-Access Badge, click here, to order a Virtual All-Access Pass, click here.

Inspired by Eastern European folklore, this shocking thriller stars Yancy Butler (Kick-Ass, Hard Target) as a matriarch who spends twenty years suppressing a maleficent curse that was placed upon her bloodline, only to have a family member knowingly release it forcing her to kill or to be killed.

An anthology of four short but terrifying tales of the macabre told with great style and pulpy, grisly thrills.

This shocking tale reflecting racial and social tensions of our time centers on vacationers who turn the tables on an unhinged killer who claims to be fighting demonic forces.

This stunning psychological thriller follows a video editor at a local news channel who is inadvertently sent secret dashcam video evidence that points to a possible conspiracy and government coverup. 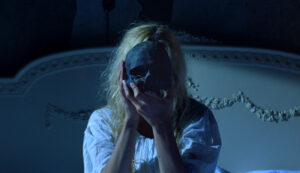 Dawn Breaks Behind the Eyes

The screws are tightened in this wickedly entertaining, juicy supernatural-thriller about the vengeful spirit of an ex-girlfriend who makes life hell for the man who scorned her. 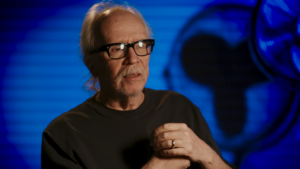 The History of Metal and Horror

Filled with countless clips and entertaining moments, THE HISTORY OF METAL AND HORROR is a nostalgia trip of some of the most iconic horror films through the perspective of visionary artists in both the metal and horror worlds, including John Carpenter, Tom Savini, Gunnar Hansen, and Sid Haig, as well as musicians such as Kirk Hammett, Rob Zombie, Dave Mustaine, Alice Cooper, and many more.

House at the End of the Forest

In this boundary-pushing frightening tale, a traumatized woman who was previously a victim of a brutal attack by a stranger, is stalked by a killer in her summer cabin.

Best known as the creator of the Japanese Ju-on series and The Grudge franchise, Takashi Shimizu returns with this new nightmare about a village at the end of a forgotten tunnel from which no one has ever returned alive. 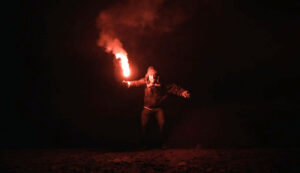 It Came from Below

In this riveting, claustrophobic nail-biter, a caving expedition goes horribly wrong as the explorers become trapped and ultimately discover that they are not the only dwellers of these ominous caverns.

This bloody, brutal, breakneck, black-hearted treat follows a fateful chain of events that begins to unravel after two brash insurance salesmen go knocking on the wrong door and find themselves trapped in a stranger’s basement, who is actually a cold-blooded serial killer.

In this chilling story of terror, murder and unknown evil, a fractured family is forced to face their demons as they unwittingly become embroiled in a man’s attempt to prove the existence of the supernatural in order to overturn a friend’s murder conviction.

Set in Montevideo, Uruguay, this ultra-violent neo-Giallo slasher follows a serial killer who slashes up an audience one by one during the final showing of a horror film in a small downtown cinema.

Night at the Eagle Inn

Fraternal twins embark on a pilgrimage to a remote inn to investigate the last known whereabouts of their father who mysteriously disappeared the night they were born — their exploration leading to shocking revelations as the property’s dark secrets ensnare them in a hellish labyrinth they must escape before dawn.

Three students filming a horror movie stumble upon something much worse, and their only hope for survival is two detectives who find the camera that was left behind.

As the world faces a deadly plague, a frontlines parasitologist is imprisoned in a life-suspension chamber. To escape she must destroy the last of her kind.

A criminal on the run breaks into the home of a high-class escort, only to discover that you get more than you bargain for with Val – short for “Valefar” – a demon who offers to make all his problems disappear if he agrees to follow her rules. 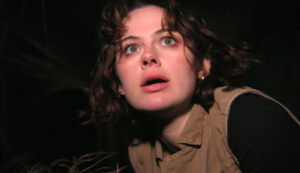 In this Florida moc-doc, a young student journalist and her friends travel to a small town in Central Florida to collect documentary footage about the Skunk Ape (aka The Wild Man or Bigfoot), a legendary local monster who they believe is behind the disappearance of many young women.

Filled with thoughtful commentary, lush visuals, and a myriad of perspectives, this landmark film is the first feature-length documentary on the history of folk horror and a resplendent treasure for horror lovers.

This dark, visually rich, and disturbing contemporary adaptation of the well-known and controversial gothic feminist horror story is a chilling and boldly original vision of a woman suffering from hysteria. 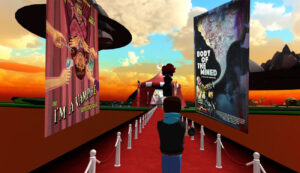 Popcorn Frights’ first-ever Virtual Reality world experience is created in partnership with the O Cinema, an independent non-profit based in Miami. Hosted on AltSpaceVR, the Virtual Reality environment will feature live events and an exclusive selection of short films that will receive their premieres in this unique digital space. The AltSpaceVR platform will be free to all audiences and available through Quest or STEAM headsets or on PCs. Short films premiering in Popcorn Frights’ VR world experience are:

Body of the Mined

A quiet, young woman moves into a new building and meets a reclusive engineer at the brink of completing a bizarre, extraordinary machine.

At the beginning of the COVID-19 pandemic lockdown, 8-year-old Jackie is so confused by her bewildered parents’ behavior that she thinks she’s turning into a vampire.

The intergalactic music nerds August and Elfi conquer the opera stage and orchestrate an extraordinary adventure in an opulent manner.

A woman is terrorized by a cursed antique.

Special presentation of Alex Proyas’ new short film Mask of the Evil Apparition, which was made entirely with virtual production and is uniquely set in the Dark City universe. Accompanying the screening is a Q&A with Alex Proyas hosted by filmmaker Joe Lynch (Mayhem, The Movie Crypt podcast):

Mask of the Evil Apparition

A young woman lost in a nocturnal, dreamlike city, with twin psychic brothers who try to help her find her way home as she is pursued by a shadowy cult known as The Mysterious Ones.

Animation Domination
The endless possibilities of genre animation are on dazzling display in this retina-reeling, round-the-world showcase of some of the medium’s most innovative, boundary-pushing, and mind-enhancing short films:

A celebration of some of the year’s most fantastic international short films from new emerging voices and established filmmakers:

A celebration of new works from cinematic scaremongers that bring nightmares into waking hours with thrills, chills, and spills: