An ex-firefighter in Cape Town is forced to fight for his life after being accused of murdering his wife. As he struggles to survive, connections are revealed between his past, the origin of his PTSD, the mysterious death of his wife, and a government conspiracy with terrifying implications.

A high-tension, politically-charged action thriller shot and wrapped safely during the pandemic, INDEMNITY is the latest from Cape Town production studio Gambit Films, producers of the hit Netflix series Blood & Water and instrumental in bringing South African genre cinema into the mainstream. The film marks the feature debut from writer/director Travis Taute, co-writer of Nosipho Dumisa’s award-winning NUMBER 37 and co-director of the short that preceded it by the same name, as well as a writer and director on Blood & Water. 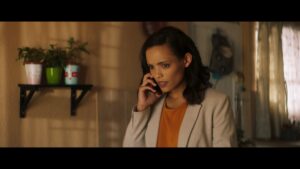 INDEMNITY will World Premiere August 11th at the Imperial Theatre in Montreal, QC, as well as screen virtually, as part of the 25th Fantasia International Film Festival