“The gore is brutal…I had to skip over parts just to get through it. Very creative premise.”

“What do you get when you mix a hurricane, 5 people stranded in the storm and a crazed killer? You get a fast paced fight for survival. Great story that will keep you on the edge of your seat.”

“This was a fun, quick slasher story. The characters were interesting and the killer was definitely someone I’d never want to run into.”

“The scenes with the characters was endearing, and I appreciate the diversity the author brought to the scene…The gore is brutal in this novel and I couldn’t stomach it. I had to skip over parts just to get through it. Very creative premise and a fast read.” 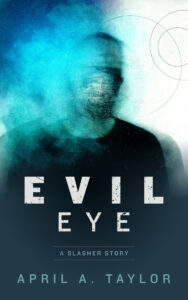 “A suspenseful horror story for classic horror fans everywhere…This one isn’t for the faint of heart, so this serves as fair warning…What you don’t expect are the scenes that humanize the characters and make you feel for them. The character development is obvious and intentional, and you don’t get that in a lot of horror…Taylor confidently and expertly wraps a horror story within a survival story–perfect if you like both…It will become one of your horror favorites, and Taylor will quickly become one of your go-to horror writers.” – Readers Favorite

“I had a blast hunkering down in bed with the lights off and getting swept away with this book. More then once I thought about turning the lights back on. The novel just has such a great creep factor to it!” – Creature From the Book Lagoon

“The murders are ruthless, and they’re supposed to be. When combined with the vivid characterizations, they’ll stick with you long after you’ve finished the book.” – Madison Graph

“Taylor does a great job with a breakneck pace, keeping both action intense, and dialog engaging. Even in such a quick read, Taylor succeeds at bringing each character to life, as their lives are threatened at every turn.” – D.M. Siciliano, author of Inside

During the eye of a hurricane, evil strikes.

Six strangers get stuck on an island during a roaring hurricane. They have nothing in common, but five of them will have to join forces to survive the night. Meanwhile, the sixth wants nothing more than to kill every single one of them.

Join Annette, Chad, Heather, Spencer, and Kate on the worst night of their lives. Can they survive or will the killer maniacally laugh while eviscerating them? Filled with gore, terror, and the little moments between humans that can make or break their budding friendships.

Grab a copy of the latest terrifying book from the #1 Amazon best-selling author behind Sinkhole and The Haunting of Cabin Green. Evil Eye is a mixture of the classic slasher Halloween and the fun survival horror movie Crawl…

And after reading this amazing book, don’t miss out on April’s other best selling books like…

Welcome to Cabin Green, where the setting is familiar, but the story is completely unexpected. A terrifying slow-burn that combines the literary Gothic prose of Shirley Jackson, Ambrose Bierce, & Thomas Tryon with the “what’s really real?” aspects of The Shining. Cabin Green has also been compared to the devastation of Hereditary and the socially progressive, ambiguous approach of Paul Tremblay.

Going to Cabin Green alone after the death of his fiancée was Ben’s first mistake. His second mistake was tempting fate by saying, “There’s no such thing as an evil building.” Now he’s caught in a nightmare of his own making deep in the woods of Northern Michigan. Even worse, a family history of mental illness makes it impossible for him to know if the ghosts haunting the cabin are real or all in his head. 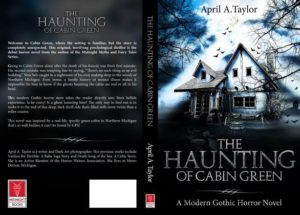 Named one of the BEST HORROR BOOKS OF 2018 by Inquisitr

Named one of 2018’s SCARIEST HORROR BOOKS by Ranker

About Author April A. Taylor

April A. Taylor is an award-winning, multi-genre author and dark art photographer. Her debut novel, The Haunting of Cabin Green, was featured on:

Sinkhole: A Horror Story and Missing in Michigan received 5-Star ratings from Readers’ Favorite. Corvo Hollows was named a 5-Star Must Read Book by Reedsy.

Sinkhole: A Horror Story was featured on:

-Grit Daily’s ‘Horror Continues to Thrive with the Scariest Books of 2019.’
-Medium.com’s ‘Celebrate Halloween with These Macabre and Progressive Horror Books.’
-BuzzFeed Community’s ‘7 New Horror Books That Will Actually Scare You.’

The Haunting of Cabin Green was the #1 Amazon best seller in the U.S. New Horror Releases category for three straight weeks. It went on to become a #1 Best-Seller in Gothic, Ghosts, U.S. Horror, and LGBT Horror. Additionally, it was the Top Vote-Getter in the Horror/Suspense category of The Kindle Book Review’s 2018 Reader’s Choice Awards.

Both books in her Midnight Myths and Fairy Tales series became a #1 Best Seller in Amazon’s Canada store during March 2018.

Many of April’s books take their inspiration from real-life events. Local history is woven throughout the Alexa Bentley Paranormal Mysteries Series, and all of her novels/novellas contain at least one or two elements from the author’s life.

In her psychological thriller book, Corvo Hollows, April delved even deeper into her own real-life events through a fictionalized account of one of the freakiest encounters she’s ever been involved in. The main character in Corvo Hollows also battles fibromyalgia, as does April.

Like many writers, she started putting pen to paper during early childhood. Her first project was a family newspaper entitled The Taylor Family Times. Since then, she’s spent more than three decades honing her craft through a wide variety of fiction and non-fiction projects.

April’s appropriately spooky black cat, Riley, is her toughest editor and critic (look for pictures of him in action – and sleeping on the job – on Instagram!).

Horror caught her attention at a young age, and she’s enjoyed exploring the darkness hidden inside everyone’s psyche ever since. She’s also intrigued by each person’s capacity for astounding levels of goodness in the face of overwhelming evil.

April’s horror, paranormal mysteries, thrillers, and dark, reimagined myths and fairy tales tackle both these topics. The darker side of humanity is also on display inside her Fine Art and Dark Art photographs, which have been published and exhibited around the world by a diverse list of media sources such as Fangoria, Scream: The Horror Magazine, and the short horror film Cathartic.

April is a proud member of the Horror Writer’s Association. She lives in Michigan with the love of her life and their two cats. If her life was a cartoon, she’d be Lisa Simpson.

-Learn more about her