Our ‘Focus on Fantasia 2021’ series takes a look at some of the terrific horror films coming to this year’s Fantasia International Film Festival. Today we focus on one of the festival’s On Demand titles, “Frank & Zed.” 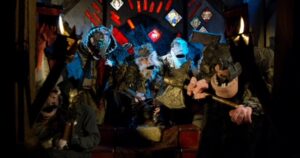 With FRANK & ZED, director Jesse Blanchard seizes an opportunity born from lack to make one of the past year’s juiciest crowd-pleasers. Truly a DIY passion project, conceived and made over six years, FRANK & ZED embodies the resilience of truly underground cinema. Blanchard takes full advantage of his vision and control in his feature debut, as he crushes all boundaries of good taste, offering a film that will inspire shocks and awwws. 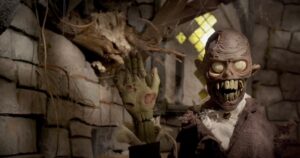 One of the most technically impressive puppet movies to come out of horror, FRANK & ZED also has an incredible sense of character and story. Far more than just a wall-to-wall bloodbath, FRANK & ZED is a film with a lot of heart. While literally monsters with a passion for electricity and brains, the film showcases the pair as underdogs just trying to make it in this cruel world. Who could have imagined that one of the year’s goriest films would be one of the most tender tales of friendship in recent memory as well? Since its world premiere at Nightstreams last year, FRANK & ZED has been charming audiences with its inventive and expressive characters, deranged sense of fun and wicked practical effects. – Justine Smith

BLADE: THE IRON CROSS Now on Blu-ray and DVD!