Our ‘Focus on Fantasia 2021’ series takes a look at some of the terrific horror films coming to this year’s Fantasia International Film Festival. Today we focus on one of the festival’s In Person & Virtual Screening titles, “Brain Freeze.” 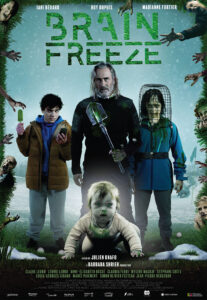 In the small, middle-class community of Ile-aux-Paons (Peacock Island), a new fertilizer is spread on the golf courses to allow the rich to play year-round. But the experimental fertilizer contains an active component that contaminates the population, turning them into zombies interested only in multiplying. This is how André (Iani Bédard), a young teenager who is taking care of his baby sister, crosses paths with Dan (Roy Dupuis), a security guard. As they journey across their quarantined island, they try to find the source of the evil and save themselves!

BRAIN FREEZE offers zombie-movie fans the perfect mix of horror and comedy, while fully embracing its Quebec identity. There are some very bloody scenes, the zombies take many forms, but thanks to the impressive cast, so do the larger-than-life comic characters. Ile-aux-Paons becomes a crowded microcosm, where we meet a wealthy couple (Louis-Georges Girard and Mahée Paiement), an overworked single mother (Anne-Élisabeth Bossé), one of the men at the source of the epidemic (Stéphane Crête) and the outside forces trying to halt the contamination (Mylène Mackay).

Writer/director Julien Knafo couldn’t have chosen a better time, after a year of pandemic, to release a zombie movie that satirizes, among other things, crisis management in Quebec. The undead in cinema have often been used as a parallel to societal problems, and the code is obeyed here. In addition to the obvious environmental critique, the film also deals with citizen inaction and class struggle. We even find far-right radio commentary in the background (with Simon-Olivier Fecteau and his producer, Marie-Lyne Joncas). BRAIN FREEZE is first and foremost an excellent splash oif entertainment that will please both horror lovers and those hungry for a good laugh! – translation: Rupert Bottenberg 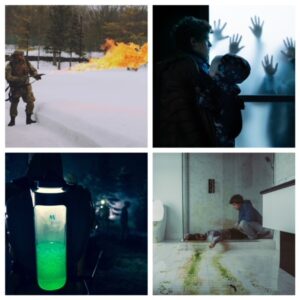 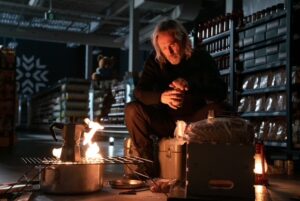 “Seance” to Premiere Exclusively on Shudder on Sept. 29th