A transgender sculptress has a lesbian awakening when her creation comes to life to rock her world.

Shot on 16mm and featuring original music from Montréal’s Kue Varo, MONSTER DYKË is a sexy, gritty, campy yet tender portrayal of transgressive love and lust.

Lesbian power couple Mariel Sharp and Kaye Adelaide are at back at it after the multi-award-winning (incl. Fantasia’s Best Canadian short) witchy horror comedy DON’T TEXT BACK.

MONSTER DYKË is another shoe-string budget short from True Sweetheart Films, short during the depths of the pandemic by a micro crew of über talented lgbtq+ and women artists. 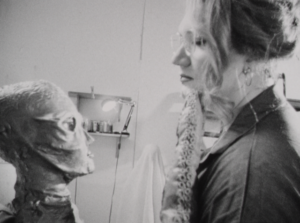 The film stars writer/director Kaye Adelaide as The Sculptress and her co-star Andromeda is played by Herself –  and she’s the foxiest life-size latex sculpture you ever did see.

MONSTER DYKË will premiere as part of Fantasia’s Selection 2021, and be followed by GIVING BIRTH TO A BUTTERFLY (d. Theo Schaefer). 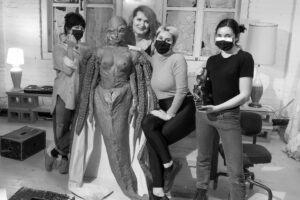 Official Trailer for ALONE WITH YOU – In Theaters February 4, 2022 and On Demand, Digital and DVD February 8, 2022

One thought on “Slimy, Sexy Short Film MONSTER DYKË to Premiere at Fantasia 2021”