Warped Releasing will be releasing the savagely violent, crime horror/thriller Hidden in the Woods (2012) on special edition Blu-ray, filled with special features fit for any cinephiles collection.

Pre orders are now live on our website with a 10th September 2021 U.K. release date.

Starring Siboney Lo, Daniel Antivilo, Carmen Paz, Francois Soto, Carolina Escobar, Jose Hernandez and directed by Patricio Valladares. At the 2012 screening of the film at Londons Frightfest , Paul McEvoy, the festival’s co- director called Hidden In The Woods a “Punk Rock blast of pure adrenaline from South America; uncompromising, unflinching, unstoppable, Valladares is a genre force to be reckoned with.” 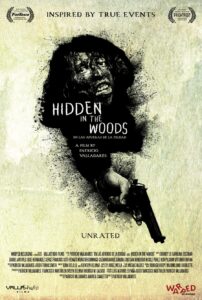 Synopsis:
After their abusive father is jailed, two sisters being raised in a remote area of Chile find they have to answer to their uncle, a drug kingpin who wants his missing product back.