Press Release
August 18, 2021
Posted By: HorrO 0 Comment Back to the Future, Candyman, Dare to Wear Fright-Rags' CANDYMAN Apparel Plus THE BURBS HIGHLANDER & BACK TO THE FUTURE, Highlander, horror, Press Release, promote horror, Spread the Horror, The Burbs

As Nia DeCosta breathes new life into Candyman, the horror icon has received a buzz-worthy line of shirts from Fright-Rags. The apparel company also branches out beyond horror with designs from The ‘Burbs, Highlander, and Back to the Future. 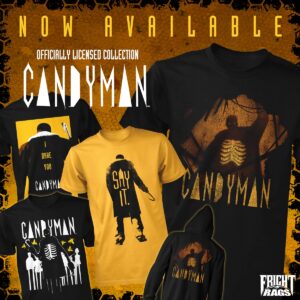 Just in time for Candyman’s long-awaited return, Fright-Rags has official merchandise for the new film. Even if you don’t dare to say his name, be his victim with four designs, including a zip-up hoodie option.

The ‘Burbs moves in to Fright-Rags. Joe Dante’s cult classic has received six T-shirts, including a tribute to The Exorcist.

There can only be one Highlander, but Fright-Rags has four shirts from the ’80s fantasy favorite, from a Frank Frazetta homage to a He-Man parody.

Back to the Future time travels to Fright-Rags for a collection featuring five nuclear shirts along with socks featuring Marty and Doc that will make you exclaim “Great Scott!”

Candyman, The ‘Burbs, Highlander, and Back to the Future collections are on sale now at Fright-Rags.com.

Official Trailer for “The Faceless Man” Coming to Digital August 28