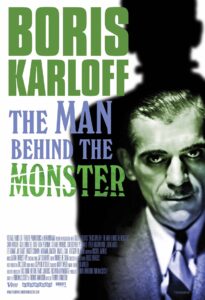 Shout! Studios has announced today their acquisition of North American distribution rights to BORIS KARLOFF: THE MAN BEHIND THE MONSTER. This captivating new documentary sheds light on William Henry Pratt (better known by his stage name, Boris Karloff) as Hollywood’s master of menace, as well as his films, his legend and the fears that haunted him through his life. Abramorama will release the film in theaters on September 17th.

Directed by Thomas Hamilton (Leslie Howard: The Man Who Gave a Damn) and co-produced and co-written by Ron MacCloskey, the film provides a riveting depiction of Karloff and the genre he helped define through exclusive interviews with his daughter, Sarah Karloff, and filmmakers he influenced, including Peter Bogdanovich, Guillermo del Toro, Christopher Plummer, John Landis, Roger Corman and Kevin Brownlow. The film also features the original song “Frankenstein’s Lament” by famed jazz bassist Jay Leonhart.

“In Boris Karloff: The Man Behind the Monster, audiences will be taken on a journey through Boris Karloff’s life and career. They will discover the secrets of the man, the struggles and triumphs of his career, as well as the surprising twists it took, and hear direct testimony from the man himself and those who were closest,” stated director Thomas Hamilton. “Additionally, we chart the rise of one of the most durable of Hollywood genres, the horror film, and provide fresh perspectives on the peculiar power that these films retain, 90 years after they were made.”

“Thomas and Ron have done a first-class job of telling the story of Boris Karloff’s life. I was a ‘monster kid’–my brother and I were obsessed with them,Frankenstein and The Mummy most of all–so I consider it a privilege and high honor to help bring Boris Karloff: The Man Behind the Monster out into the world,” said Abramorama’s CEO, Richard Abramowitz.

“The timing seems perfect to release a documentary about the heralded actor Boris Karloff. His legacy continues to grow and in keeping with Shout! Studios’ focus in perpetuating such legacies, we are thrilled to introduce this documentary to an audience that can once again celebrate Mr. Karloff’s iconic status,” said Mark Balsam from Shout! Studios.

Abramorama is the preeminent global theatrical distribution and rights management partner for documentary and music films and is recognized for the consistent high quality of its work on award winning features. An innovator in the focused, personalized form of film marketing, promotion, distribution and live, event and digital cinema, Abramorama provides invaluable alternatives to filmmakers while continuing to trail-blaze exciting new pathways to defined audiences.