See the Trailer for Witness Infection 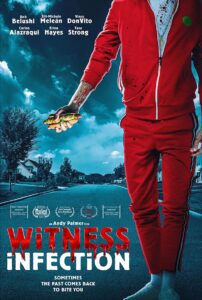 The annual Los Angeles competition will kick off with an opening night gala September 30
In addition to 7 features, the festival will also screen more than 65 outstanding and diverse international short films, covering just about every aspect of horror, sci-fi, and fantasy.
The Shriekfest Film Festival runs September 30-October 3, 2021. An opening night party will take place at Boardners/Bar Sinister in Hollywood; the rest of the festival will be at the iconic Raleigh Studios on Melrose Ave.

Amityville Uprising: A Behind The Scenes Look w/ Mike Ferguson