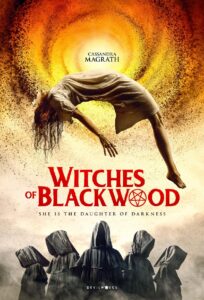 The film will receive a home entertainment release, with a day-and-date DVD and Premium TVOD September 7th followed by a full digital release.

The film follows a young woman Claire (Magrath) who, following the death of her mother, returns to her hometown, to discover it riddled with witchcraft and overshadowed by a mysterious darkness, steeped in rumours of a soul-stealing entity.

As she seeks the truth behind her mother’s death, a confrontation with a coven of witches is the only way to survive.

WITCHES OF BLACKWOOD will be on DVD/Digital September 7