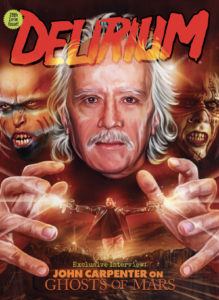 Carpenter sits down with DELIRIUM editor and co-founder Chris Alexander for an exclusive new interview discussing the making of the movie, including the casting (and re-casting), special effects, critical reception and of course, the orchestration of Carpenter’s own punishing synth-metal score.

The startling cover features an original painting by Canadian fine artist Matthew Therrien, a conceptual re-imagining of the original theatrical poster, with Carpenter himself holding court over some of GHOSTS OF MARS’ most iconic characters.

DELIRIUM and Carpenter make the case for that unpopular argument in the pages of DELIRIUM #28, on sale exclusively via Full Moon Direct late September.

Subscribe to DELIRIUM today and get a free subscription to Full Moon Features, the acclaimed cult movie streaming channel. Your subscription will begin with this very issue!