A Novella about Friendship and Monsters set in Soviet-era Russia 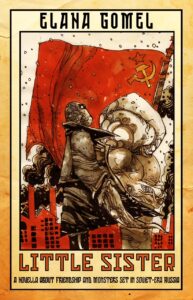 A schoolgirl steps between a soldier and a ravening monster…

1943. Soviet Union is under attack as WW2 is raging. Fighting in the doomed battle of Kursk, Andrei finds himself in a strange city where Svetlana, a girl he has never seen but who looks eerily familiar, saves him from a fist-faced creature. When Svetlana’s family is lost, the two embark on a harrowing odyssey across the snow-covered plain, battling deformed former humans and taken prisoners by the army of black stars. Against impossible odds, they reach their destination where they discover a secret that will change history.

Little Sister is a dystopian historical fantasy set in the Soviet Era. Presenting a richly imagined alternative history world, this is a tale of friendship, survival, and heartbreak. Fans of The Book Thief and The Wolfhound Century will enjoy this striking fantasy rooted in Russian fiction.