Florida-based gothic/rock band, OCTOBER NOIR has unleashed their new video for the song, “Windows.”  The song appears on their forthcoming new album, Fate, Wine & Wisteria due out on September, 22.

The song is about finding a savior in the midst of being in a miserable state of being and being able to see everything the world has to offer through that person’s eyes.

The video was filmed in multiple locations around south and central Alabama, depicting the band being in different parts of the world and all the scenery has to offer. 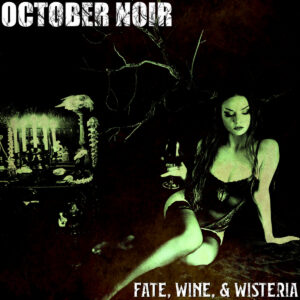 Since 2016, OCTOBER NOIR has been crafting original songs and covers faithfully in the spirit of their namesake. Born out of a desire to fill a void long left unfilled for grieving fans, OCTOBER NOIR’s music is an echo of the legacy of one from beyond the veil. After the tragic passing of Type O Negative’s Peter Steele, the band seeks to carry the torch of his iconic music to the next generation as the first true disciples of Negativism. The band has produced two albums and six cover singles to date. On September 22nd 2021, the band will be adding a third album to their repertoire (also featuring their seventh cover, a favorite from Glenn Danzig) –Fate, Wine & Wisteria-available on CD and digital formats.