Spotify announced DISAPPEARANCES WITH SARAH TURNEY, the newest crime mystery Spotify Original podcast from Parcast, will premiere Thursday, September 9th. Exploring stories of those who wanted to disappear and others who had no choice, from abductions to murders, to runaways and second chances, Disappearances with Sarah Turney examines some of the most well-documented missing persons cases in history.

Listen to the brand-new trailer: HERE

Host Sarah Turney established a robust following in the true crime community after solving her sister’s disappearance by resurfacing the two-decade old cold case on TikTok, where she currently engages 1.1M followers, as well as other social media platforms. With her firsthand knowledge of how hard it is to lose someone you love, especially when you don’t have all of the answers, her new podcast will explore – how and why do people go missing? And what impact do their absences have on those who are left behind? 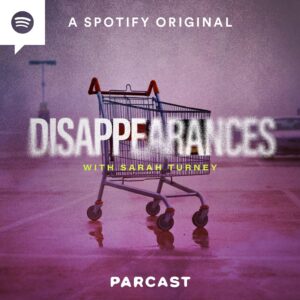 In the United States, on average a new missing person’s report is filed once every minute, each coming with its own unique story. Some of the cases explored in this season of Disappearances with Sarah Turney will include:

Additionally, in each episode listeners will be directed to Sarah Turney’s nonprofit organization Season of Justice, whose goal is to provide financial resources for both law enforcement and families in order to bring closure to those impacted by unsolved violent crimes. Each episode will encourage listeners to get help or to support anyone who is dealing with missing persons cases.

ABOUT DISAPPEARANCES WITH SARAH TURNEY:

Some people want to disappear, others have no choice. This new crime mystery from Parcast explores missing persons cases, guiding listeners through timelines and theories in search of answers. Host Sarah Turney (1.1MM on TikTok) achieved a following in the true crime community after solving her sister’s disappearance by resurfacing the two-decade old cold case on TikTok and other social media platforms.

Disappearances with Sarah Turney is a Spotify Original from Parcast. Starting September 9th, you can find a new episode every Thursday available for free on Spotify.

Sarah Turney began in the true crime space as an advocate for her missing sister, Alissa Turney. Alissa was only 17 when she went missing in 2001. Sarah exhausted all traditional legal avenues, used social media, and organized several campaigns demanding justice for her sister. After years of fighting for answers, she created The Voices for Justice Podcast featuring Alissa’s story in 2019. In August 2020 an arrest was made in the case and Sarah’s efforts were recognized by Maricopa County Attorney, Allister Adel. Since the arrest, Sarah has shifted her focus to advocating for other cases in need of justice.