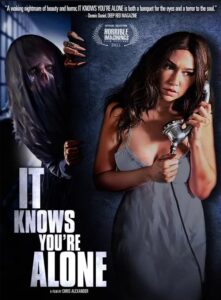 Full Moon Features continues its prolific 2021 production schedule with the release of the surreal, microbudget horror drama IT KNOWS YOU’RE ALONE, the first picture from Full Moon’s newly minted sub-label, DELIRIUM Films. Written, directed and scored by DELIRIUM magazine editor Chris Alexander (NECROPOLIS: LEGION), IT KNOWS YOU’RE ALONE (which recently had its world premiere at San Diego’s Horrible Imaginings Film Festival) attempts to capture the same sort of color-saturated, sensual and stylish ’70s vibe found in the work of European directors like Jess Franco and Jean Rollin and classic films from France’s Eurocine studio, movies that have been distributed via Full Moon starting with Charles Band’s Wizard Video in the 1980’s, right up until present day.

IT KNOWS YOU’RE ALONE stars Bee Dawley as Natalie, a beautiful antiques dealer and collector who lives a quiet life in isolation by the sea, One day, while walking the rocky nearby beaches and searching for treasures from the past, Natalie finds an old nautical phone washed up on the shore. She brings it home and begins having eerie dreams of the device ringing, the voice on the end vague and ghostly. And when those calls are followed by the presence of a shrouded woman in black (Ali Chappell) who haunts her house, Natalie’s already fragile grip on reality begins to slip. Who is the voice on the phone? Who is the woman in black? Natalie will find out soon enough…

DELIRIUM Films aims to produce a line of microbudget “elevated exploitation” entertainments that celebrate the auteur spirit found in the pages of DELIRIUM magazine, films that favor mood, music and atmosphere and exemplify the director’s vision. The coming months will see DELIRIUM Films produce and distribute an exciting new wave of challenging low budget/high concept pictures, continuing with the upcoming SCREAM OF THE BLIND DEAD, a quote on the iconic Spanish horror films made by Amando De Ossorio in the 1970s, covered extensively in DELIRIUM Magazine. More news on the future of DELIRIUM Films to come.

Dennis Daniel of DEEP RED Magazine said IT KNOWS YOU’RE ALONE is “a waking nightmare of beauty and horror, both a banquet for the eyes and a terror to the soul.”

See if you agree when the film premieres EXCLUSIVELY on Full Moon Features this Friday, September 17th with a premiere on Full Moon’s Amazon Prime channel to follow on September 27th.