“Fighted” is the second single from GoMa’s latest album, “The Dark Monarc”. And can be streamed on YouTube here.

“The Dark Monarc” is now available on all digital media platforms and can be purchased / streamed on Bandcamp, Spotify, iTunes, Amazon and YouTube.

Download the digital album using the link below: https://www.dropbox.com/sh/7c128mu615mx5h4/AADHPXtGY0o0Tnp4DKq-Qh5ga?dl=0 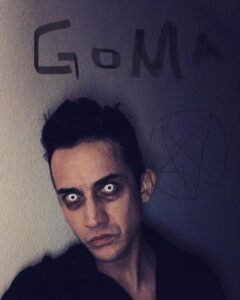 Described as “vampire club music”, GoMa combines all the musical interests Juan had growing up into one band by fusing and blending musical genres such as alternative rock and electronic rock.

2018 saw the release of GoMa’s first album. A self-titled release that perfectly touched upon his electronic and rock influences while maintaining his own sonic voice.

Working with Varicella leader and vocalist Chris Bollinger, came a new single from GoMa in early 2019. “Los Side Effects” featuring Mr. Bollinger on guest vocals. The crazy hypnotic lyrical style and vocal delivery from Mr. Bollinger fused with the dark electronic groove of GoMa, showcases both sides of each artist without giving way to any compromises.

And now GoMa is back with his second full length album titled “The Dark Monarc”. Based on an imaginary horror movie from Mexico, GoMa created a Michoacán Mexican occult love story to honor his family heritage.

The album’s central theme revolves around a dark tale taking place in the 1980s. And explores the story of GoMa himself being shamed and disgraced by his own family members.

Each song is a one part of a whole, featuring stories based on a couple’s relationship. How that relationship differs between each couple, as well as the breakup & makeup discussions had throughout the course of their relationships. All of which leads to a spiritual awakening, which is had by the storyteller.