This author was shocked when readers began comparing her novel to the Covid-19 outbreak and the events that followed. 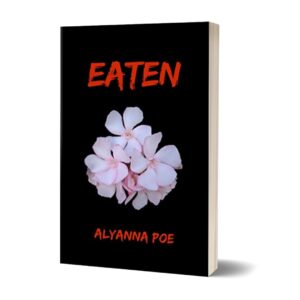 Author Alyanna Poe began writing her horror novel back in 2015. After months of editing the finished manuscript and 30+ rejections from agents, she made the decision to self publish on the spookiest day of the year. Halloween 2019, Poe, age 18, put her first novel up on Amazon. Two years later, readers have made the connection from Poe’s novel to events spanning since its publication, including the outbreak, riots, and the malice involved.

“Generally my writing comes from a darker recess of my mind. The idea for EATEN came to me as naturally as a daydream, and I’m perplexed as to how many aspects of it are coming true on a personal and international level.”

Being a Poe has impacted her greatly, inspiring her to write terrifying tales of both gothic and gore. Yes, she is related to Edgar Allan Poe, being his first cousin six times removed. Had she been born in the 1800s, she would have been his first cousin *wink wink* 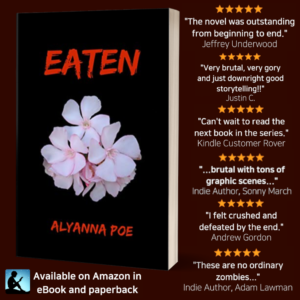 She was 18 when she self published her first novel, EATEN, and has since published two other novels. Through her social channels, she’s experimented with horror photography and comedic takes on her everyday life as an author. Her passion is writing, and nothing will stop her from trying her best.

Amelia Everheart: the center of a crumbling family. Her school life is just as well since she’s been outcasted as a freak. Finding comfort by picking at the layers of her continuously infected skin, Amelia starts to change.

A man has been speaking to her, a man that only exists in the pus that oozes from her sores, and he’s telling her to carry out his intentions. 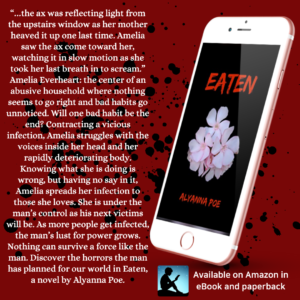 Will our world survive a force like the man? Or will we all succumb to the malice that’s just below the surface?

If you’d like a copy of EATEN or any of Alyanna Poe’s other books, you

can find her on Amazon at

And for those interested in getting to know her better, you can read about her, sample her writing, and read interviews on her website, or follow her socials. She is open to taking readers’ questions via email or DM.