From the Creators of the Twisted Horror-Thriller Fear PHarm, the Nightmare-Induced Sequel Follows a Horrifying Family Business that Leads to “Out of Skin” Scares, Arriving on DVD and On Demand on October 19 From Indican Pictures 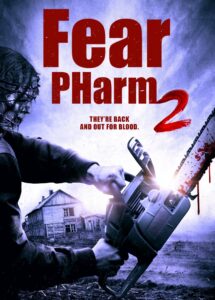 Fear PHarm’s highly anticipated sequel, Fear PHarm 2, delivers “twice the terror” (ABC-TV) when it arrives on DVD and On Demand on October 19 from Indican Pictures. As Melanie (Tiana Tuttle, American Psychos) continues her attempt to outrun the murderous Walker family, the nefarious family’s sinister desires remain as they rely heavily on Melanie’s cooperation.

Equal part gore, guts and guffaws, Fear PHarm 2 reunites the original film’s creative team, including director and writer Dante Yore (Fear PHarm) and producers Mark S. Allen (616 Wilford Lane) and Howard Burd (Apparition), for another round of scares. The Walkers continue to create a revolutionary skin cream from harvested skin, but now hope to evolve the family business to a worldwide venture with Melanie serving as a crucial part of its development. When Melanie is accidentally awakened from her medically induced deep sleep, she takes charge of freeing her fellow captives who have been plucked from the Walker’s corn maze haunt to help fulfill the family’s growing consumer demands. Melanie and company must make the dangerous trek through the winding corn maze to freedom, but the journey is riddled with members of the Walker family who are ready to fight to the death to save their family business. This next chapter in the horrifying saga will make audiences’ skin crawl as they head back to the farm of frights.

The horror-thriller also stars fan-favorite originals, including John Littlefield (616 Wilford Lane) and Aimee Stolte (Megalodon), to reprise their roles as audiences are taken back to the Walker family farm for another terrifying adventure. Fear PHarm 2 will be available on DVD for the suggested retail price of $26.98 and On Demand via Apple TV, Google Play, Prime Video, FandangoNOW and more on October 19.

Fear PHarm 2 picks up where Fear PHarm left off. After fighting for her life within a corn field maze and trying to outrun a number of murderous psychos, Melanie (Tuttle) has regained consciousness to discover that she is now being held hostage by the Walker family, so they can continue to harvest her skin for their breakthrough skin care cream. Business is booming for the Walkers and Melanie soon finds that she’s not alone. Dozens of others are being held captive for their skin, as the family has plans to grow the business internationally. With one failed escape attempt under her belt, Melanie must once again fight for the opportunity to survive.