Will you Dare take on the photoghasts and exorcise them before the time runs out? 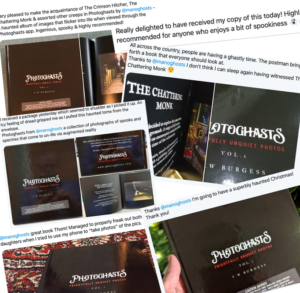 Following on from the success of T.W. Burgess’ animated horror series Photoghasts, this Halloween sees the launch of the world’s first ‘Augmented Reality Haunted Photo Game’. By using the Photoghasts app on a single smartphone / tablet, between 1 to 4 players can go head to head in an attempt to ‘exorcise’ each of the cursed Photoghasts before the time runs out. Each me a Photoghast is scanned with a smart device, the animated horror is unleashed in real-time thanks to the cursed technology of the app.

With scores calculated by the app itself, Photoghasts blends together video game score systems with the traditional card game thanks to the power of augmented reality. Compete against your friends irl or even better, share your scores online via the app with other Photoghast players!

Gameplay is simple! Played with just one pack of cards and one smart device, the assigned dealer, shuffles and subsequently splits the pack by the set number of players (up to 4). With each player also dealt a set number of ‘action cards.’ Then, the dealer launches the Photoghast app on their smart device. Once the game begins, players take it in turn to scan their cards in the allocated time in the hope of exorcising or ‘fading’ each photo. Exorcise as many ghosts as possible. But beware, that camera shutter can stick, allowing more ghosts to be scanned by your opponent. Or even worse, you might scan the wrong card unleashing the ghost trapped inside. Each card has it’s own point value system and every time one is scanned it’s very own custom animation will be triggered. But if you want to play head to head with friends then you’re in luck. There’s a host of exciting features to uncover. The great thing is, all you need to play is one smart device and a pack of Photoghast cards, small enough to throw it in your pocket at any time. Alternatively play offline in a classic head to head battle. Pit the various abilities of the Photoghasts and see if you can win!

Oh and here’s the scary part: Play the game after 9pm and you run the risk of disturbing the original Pho-tographer. Not much is known of him, only that legend told how he utilized dark magic to capture his original haunted photos. Magic which allegedly cursed him to carry on taking photos long after his death. Constantly searching for souls to imprison. Beware, should you dare play the game after 9pm then he might just appear and snatch you up as well to keep in his cursed collection.

Elisha Cuthbert and Eoin Macken to Star in “The Cellar”